The Poetry Of Robert Browning

by Stopford A. (Stopford Augustus) Brooke 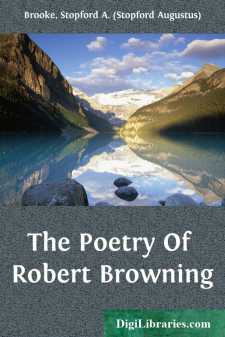 CHAPTER I BROWNING AND TENNYSON

Parnassus, Apollo's mount, has two peaks, and on these, for sixty years, from 1830 to 1890, two poets sat, till their right to these lofty peaks became unchallenged. Beneath them, during these years, on the lower knolls of the mount of song, many new poets sang; with diverse instruments, on various subjects, and in manifold ways. They had their listeners; the Muses were also their visitants; but none of them ventured seriously to dispute the royal summits where Browning and Tennyson sat, and smiled at one another across the vale between.

Both began together; and the impulses which came to them from the new and excited world which opened its fountains in and about 1832 continued to impel them till the close of their lives. While the poetic world altered around them, while two generations of poets made new schools of poetry, they remained, for the most part, unaffected by these schools. There is nothing of Arnold and Clough, of Swinburne, Rossetti or Morris, or of any of the others, in Browning or Tennyson. There is nothing even of Mrs. Browning in Browning. What changes took place in them were wrought, first, by the natural growth of their own character; secondly, by the natural development of their art-power; and thirdly, by the slow decaying of that power. They were, in comparison with the rest, curiously uninfluenced by the changes of the world around them. The main themes, with which they began, they retained to the end. Their methods, their instruments, their way of feeling into the world of man and of nature, their relation to the doctrines of God and of Man, did not, though on all these matters they held diverse views, alter with the alteration of the world. But this is more true of Browning than of Tennyson. The political and social events of those years touched Tennyson, as we see from Maud and the Princess, but his way of looking at them was not the way of a contemporary. It might have been predicted from his previous career and work. Then the new movements of Science and Criticism which disturbed Clough and Arnold so deeply, also troubled Tennyson, but not half so seriously. He staggered for a time under the attack on his old conceptions, but he never yielded to it. He was angry with himself for every doubt that beset him, and angry with the Science and Criticism which disturbed the ancient ideas he was determined not to change. Finally, he rested where he had been when he wrote In Memoriam, nay more, where he had been when he began to write.

There were no such intervals in Browning's thought. One could scarcely say from his poetry, except in a very few places, that he was aware of the social changes of his time, or of the scientific and critical movement which, while he lived, so profoundly modified both theology and religion. Asolando, in 1890, strikes the same chords, but more feebly, which Paracelsus struck in 1835.

But though, in this lofty apartness and self-unity, Browning and Tennyson may fairly be said to be at one, in themselves and in their song they were different....