The Poetry of Architecture Or, the Architecture of the Nations of Europe Considered in its Association with Natural Scenery and National Character 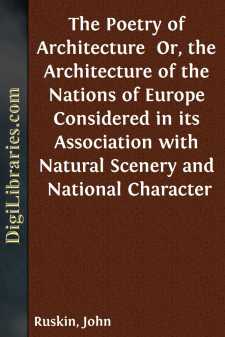 1. The Science of Architecture, followed out to its full extent, is one of the noblest of those which have reference only to the creations of human minds. It is not merely a science of the rule and compass, it does not consist only in the observation of just rule, or of fair proportion: it is, or ought to be, a science of feeling more than of rule, a ministry to the mind, more than to the eye. If we consider how much less the beauty and majesty of a building depend upon its pleasing certain prejudices of the eye, than upon its rousing certain trains of meditation in the mind, it will show in a moment how many intricate questions of feeling are involved in the raising of an edifice; it will convince us of the truth of a proposition, which might at first have appeared startling, that no man can be an architect, who is not a metaphysician.

2. To the illustration of the department of this noble science which may be designated the Poetry of Architecture, this and some future articles will be dedicated. It is this peculiarity of the art which constitutes its nationality; and it will be found as interesting as it is useful, to trace in the distinctive characters of the architecture of nations, not only its adaptation to the situation and climate in which it has arisen, but its strong similarity to, and connection with, the prevailing turn of mind by which the nation who first employed it is distinguished.

3. I consider the task I have imposed upon myself the more necessary, because this department of the science, perhaps regarded by some who have no ideas beyond stone and mortar as chimerical, and by others who think nothing necessary but truth and proportion as useless, is at a miserably low ebb in England. And what is the consequence? We have Corinthian columns placed beside pilasters of no order at all, surmounted by monstrosified pepper-boxes, Gothic in form and Grecian in detail, in a building nominally and peculiarly "National"; we have Swiss cottages, falsely and calumniously so entitled, dropped in the brick-fields round the metropolis; and we have staring square-windowed, flat-roofed gentlemen's seats, of the lath and plaster, mock-magnificent, Regent's Park description, rising on the woody promontories of Derwentwater.

4. How deeply is it to be regretted, how much is it to be wondered at, that, in a country whose school of painting, though degraded by its system of meretricious coloring, and disgraced by hosts of would-be imitators of inimitable individuals, is yet raised by the distinguished talent of those individuals to a place of well-deserved honor; and the studios of whose sculptors are filled with designs of the most pure simplicity, and most perfect animation; the school of architecture should be so miserably debased!

5. There are, however, many reasons for a fact so lamentable. In the first place, the patrons of architecture (I am speaking of all classes of buildings, from the lowest to the highest), are a more numerous and less capable class than those of painting. The general public, and I say it with sorrow, because I know it from observation, have little to do with the encouragement of the school of painting, beyond the power which they unquestionably possess, and unmercifully use, of compelling our artists to substitute glare for beauty. Observe the direction of public taste at any of our exhibitions. We see visitors at that of the Society of Painters in Water Colors, passing Tayler with anathemas and Lewis with indifference, to remain in reverence and admiration before certain amiable white lambs and water-lilies, whose artists shall be nameless. We see them, in the Royal Academy, passing by Wilkie, Turner and Callcott, with shrugs of doubt or of scorn, to fix in gazing and enthusiastic crowds upon kettles-full of witches, and His Majesty's ships so and so lying to in a gale, etc., etc. But these pictures attain no celebrity because the public admire them, for it is not to the public that the judgment is intrusted. It is by the chosen few, by our nobility and men of taste and talent, that the decision is made, the fame bestowed, and the artist encouraged.

6. Not so in architecture. There, the power is generally diffused. Every citizen may box himself up in as barbarous a tenement as suits his taste or inclination; the architect is his vassal, and must permit him not only to criticise, but to perpetrate. The palace or the nobleman's seat may be raised in good taste, and become the admiration of a nation; but the influence of their owner is terminated by the boundary of his estate: he has no command over the adjacent scenery, and the possessor of every thirty acres around him has him at his mercy. The streets of our cities are examples of the effects of this clashing of different tastes; and they are either remarkable for the utter absence of all attempt at embellishment, or disgraced by every variety of abomination....