The Poetical Works of Oliver Wendell Holmes - Volume 08: Bunker Hill and Other Poems 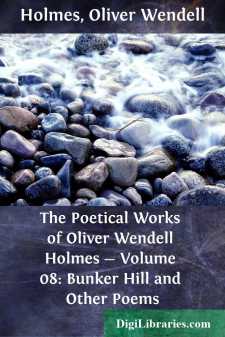 'T is like stirring living embers when, at eighty, one remembersAll the achings and the quakings of "the times that tried men's souls";When I talk of Whig and Tory, when I tell the Rebel story,To you the words are ashes, but to me they're burning coals.

I had heard the muskets' rattle of the April running battle;Lord Percy's hunted soldiers, I can see their red-coats still;But a deadly chill comes o'er me, as the day looms up before me,When a thousand men lay bleeding on the slopes of Bunker's Hill.

'T was a peaceful summer's morning, when the first thing gave us warningWas the booming of the cannon from the river and the shore:"Child," says grandma, "what 's the matter, what is all this noise and     clatter?Have those scalping Indian devils come to murder us once more?"

Poor old soul! my sides were shaking in the midst of all my quaking,To hear her talk of Indians when the guns began to roar:She had seen the burning village, and the slaughter and the pillage,When the Mohawks killed her father with their bullets through his door.

Then I said, "Now, dear old granny, don't you fret and worry any,For I'll soon come back and tell you whether this is work or play;There can't be mischief in it, so I won't be gone a minute"—For a minute then I started. I was gone the live-long day.

No time for bodice-lacing or for looking-glass grimacing;Down my hair went as I hurried, tumbling half-way to my heels;God forbid your ever knowing, when there's blood around her flowing,How the lonely, helpless daughter of a quiet house-hold feels!

In the street I heard a thumping; and I knew it was the stumpingOf the Corporal, our old neighbor, on that wooden leg he wore,With a knot of women round him,-it was lucky I had found him,So I followed with the others, and the Corporal marched before.

They were making for the steeple,—the old soldier and his people;The pigeons circled round us as we climbed the creaking stair.Just across the narrow river—oh, so close it made me shiver!—Stood a fortress on the hill-top that but yesterday was bare.

Not slow our eyes to find it; well we knew who stood behind it,Though the earthwork hid them from us, and the stubborn walls were dumbHere were sister, wife, and mother, looking wild upon each other,And their lips were white with terror as they said, THE HOUR HAS COME!

The morning slowly wasted, not a morsel had we tasted,And our heads were almost splitting with the cannons' deafening thrill,When a figure tall and stately round the rampart strode sedately;It was PRESCOTT, one since told me; he commanded on the hill.

Every woman's heart grew bigger when we saw his manly figure,With the banyan buckled round it, standing up so straight and tall;Like a gentleman of leisure who is strolling out for pleasure,Through the storm of shells and cannon-shot he walked around the wall.

At eleven the streets were swarming, for the red-coats' ranks were     forming;At noon in marching order they were moving to the piers;How the bayonets gleamed and glistened, as we looked far down, and     listenedTo the trampling and the drum-beat of the belted grenadiers...!