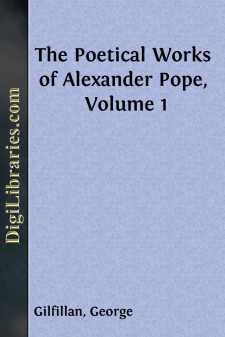 Alexander Pope was born in Lombard Street, London, on the 21st of May 1688—the year of the Revolution. His father was a linen-merchant, in thriving circumstances, and said to have noble blood in his veins. His mother was Edith or Editha Turner, daughter of William Turner, Esq., of York. Mr Carruthers, in his excellent Life of the Poet, mentions that there was an Alexander Pope, a clergyman, in the remote parish of Reay, in Caithness, who rode all the way to Twickenham to pay his great namesake a visit, and was presented by him with a copy of the subscription edition of the "Odyssey," in five volumes quarto, which is still preserved by his descendants. Pope's father had made about £10,000 by trade; but being a Roman Catholic, and fond of a country life, he retired from business shortly after the Revolution, at the early age of forty-six. He resided first at Kensington, and then in Binfield, in the neighbourhood of Windsor Forest. He is said to have put his money in a strong box, and to have lived on the principal. His great delight was in his garden; and both he and his wife seem to have cherished the warmest interest in their son, who was very delicate in health, and their only child. Pope's study is still preserved in Binfield; and on the lawn, a cypress-tree which he is said to have planted, is pointed out.

Pope was a premature and precocious child. His figure was deformed—his back humped—his stature short (four feet)—his legs and arms disproportionably long. He was sometimes compared to a spider, and sometimes to a windmill. The only mark of genius lay in his bright and piercing eye. He was sickly in constitution, and required and received great tenderness and care. Once, when three years old, he narrowly escaped from an angry cow, but was wounded in the throat. He was remarkable as a child for his amiable temper; and from the sweetness of his voice, received the name of the Little Nightingale. His aunt gave him his first lessons in reading, and he soon became an enthusiastic lover of books; and by copying printed characters, taught himself to write. When eight years old, he was placed under the care of the family priest, one Bannister, who taught him the Latin and Greek grammars together. He was next removed to a Catholic seminary at Twyford, near Winchester; and while there, read Ogilby's "Homer" and Sandys's "Ovid" with great delight. He had not been long at this school till he wrote a severe lampoon, of two hundred lines' length, on his master—so truly was the "boy the father of the man"—for which demi-Dunciad he was severely flogged. His father, offended at this, removed him to a London school, kept by a Mr Deane. This man taught the poet nothing; but his residence in London gave him the opportunity of attending the theatres. With these he was so captivated, that he wrote a kind of play, which was acted by his schoolfellows, consisting of speeches from Ogilby's "Iliad," tacked together with verses of his own. He became acquainted with Dryden's works, and went to Wills's coffee-house to see him....