The Pocket R.L.S., being favourite passages from the works of Stevenson 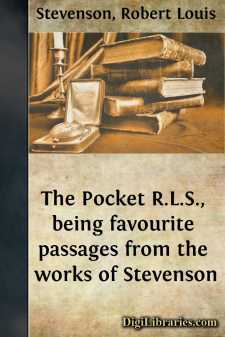 When you have read, you carry away with you a memory of the man himself; it is as though you had touched a loyal hand, looked into brave eyes, and made a noble friend; there is another bond on you thenceforward, binding you to life and to the love of virtue.

It is to some more specific memory that youth looks forward in its vigils. Old kings are sometimes disinterred in all the emphasis of life, the hands untainted by decay, the beard that had so often wagged in camp or senate still spread upon the royal bosom; and in busts and pictures, some similitude of the great and beautiful of former days is handed down. In this way, public curiosity may be gratified, but hardly any private aspiration after fame. It is not likely that posterity will fall in love with us, but not impossible that it may respect or sympathise; and so a man would rather leave behind him the portrait of his spirit than a portrait of his face, FIGURA ANIMI MAGIS QUAM CORPORIS.

The pleasure that we take in beautiful nature is essentially capricious. It comes sometimes when we least look for it; and sometimes, when we expect it most certainly, it leaves us to gape joylessly for days together, in the very homeland of the beautiful. We may have passed a place a thousand times and one; and on the thousand and second it will be transfigured, and stand forth in a certain splendour of reality from the dull circle of surroundings; so that we see it 'with a child's first pleasure,' as Wordsworth saw the daffodils by the lake-side.

But every one sees the world in his own way. To some the glad moment may have arrived on other provocations; and their recollection may be most vivid of the stately gait of women carrying burthens on their heads; of tropical effect, with caves and naked rock and sunlight; of the relief of cypresses; of the troubled, busy-looking groups of sea-pines, that seem always as if they were being wielded and swept together by a whirlwind; of the air coming, laden with virginal perfumes, over the myrtles and the scented underwoods; of the empurpled hills standing up, solemn and sharp, out of the green-gold air of the east at evening. There go many elements, without doubt, to the making of one such moment of intense perception; and it is on the happy agreement of these many elements, on the harmonious vibration of many nerves, that the whole delight of the moment must depend.

You should have heard him speak of what he loved; of the tent pitched beside the talking water; of the stars overhead at night; of the blest return of morning, the peep of day over the moors, the awaking birds among the birches; how he abhorred the long winter shut in cities; and with what delight, at the return of the spring, he once more pitched his camp in the living out-of-doors.

It was one of the best things I got from my education as an engineer: of which, however, as a way of life, I wish to speak with sympathy. It takes a man into the open air; it keeps him hanging about harbour-sides, which is the richest form of idling; it carries him to wild islands; it gives him a taste of the genial dangers of the sea; it supplies him with dexterities to exercise; it makes demands upon his ingenuity; it will go far to cure him of any taste (if ever he had one) for the miserable life of cities....