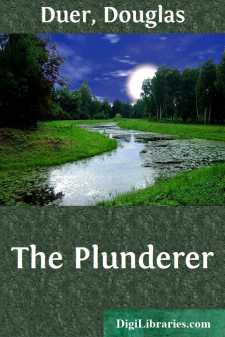 Plainly the rambling log structure was a road house and the stopping place for a mountain stage. It had the watering trough in front, the bundle of iron pails cluttered around the rusted iron pump, and the trampled muddy hollow created by many tired hoofs striking vigorously to drive away the flies. It was in a tiny flat beside the road, and mountains were everywhere; hard-cut, relentless giants, whose stern faces portrayed a perpetual constancy. At the trough two burros, with their packs deftly lashed, thrust soft gray muzzles deep into the water, and held rigid their long gray ears, casting now and then a wise look at the young man in worn mining clothes who stood patiently beside them.

Another man, almost a giant in size, but with a litheness of movement that told of marvelous physical strength, emerged from the door of the road house, and the babel of sound that had been stilled when he entered, but a few minutes before, rose again. He crossed to the well, and smiled from half-humorous eyes at the younger man standing beside the animals, and said: “Bumped into a hornet’s nest. Butted into an indignation meetin’. A Blackfoot war powwow when the trader had furnished free booze would have been a peace party put up against it.”

The younger man, who had turned to pump more water, following the polite mountain custom of replenishing for what you have used, stopped with a hand on the handle, and looked at him inquiringly.

“It seems it’s a bunch of fellers that’s been workin’ some placer ground off back here somewheres”––and he waved a tanned hand indefinitely in a wide arc––“and some man got the double hitch on ’em with the law, provin’ that the ground was his’n, and the sheriff run ’em off! Now they’re sore. But it seems they cain’t help ’emselves, so they’re movin’ over to some other place across the divide.”

“But what has that to do with us?”

“Nothin’, except that it took me five minutes to get the barkeep’ to tell me about the road. He says we’ve come all right this far, and this is the place where we hit the trail over the hills. Says we save a day and a half, with pack burros, by takin’ the cut-off. Says it’s seven or eight hours good ridin’ by the road if we were on horses and in a hurry.”

He paused and scanned the hills with an observant eye, while his companion resumed the pumping process. The trough again filled, the latter walked around the pails and joined him.

“Well, where does this trail start in?” he asked.

“He’s goin’ to show us as soon as he can get a minute’s rest from that bunch in there. Said we’d have to be shown. Said unless he could get away long enough we’d have to wait till somebody he named came in, and he’d head us into it.”

They led the burros across the road and into the shadow of a cliff where the morning sun, searching and fervid, did not reach, and threw themselves to the ground, resting their backs against the foot wall, and trying patiently to await the appearance of their guides....