The Pleasures of England Lectures given in Oxford 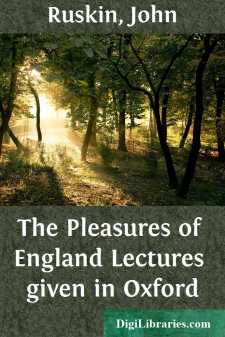 LECTURE I. THE PLEASURES OF LEARNING. Bertha to Osburga.

In the short review of the present state of English Art, given you last year, I left necessarily many points untouched, and others unexplained. The seventh lecture, which I did not think it necessary to read aloud, furnished you with some of the corrective statements of which, whether spoken or not, it was extremely desirable that you should estimate the balancing weight. These I propose in the present course farther to illustrate, and to arrive with you at, I hope, a just—you would not wish it to be a flattering—estimate of the conditions of our English artistic life, past and present, in order that with due allowance for them we may determine, with some security, what those of us who have faculty ought to do, and those who have sensibility, to admire.

2. In thus rightly doing and feeling, you will find summed a wider duty, and granted a greater power, than the moral philosophy at this moment current with you has ever conceived; and a prospect opened to you besides, of such a Future for England as you may both hopefully and proudly labour for with your hands, and those of you who are spared to the ordinary term of human life, even see with your eyes, when all this tumult of vain avarice and idle pleasure, into which you have been plunged at birth, shall have passed into its appointed perdition.

3. I wish that you would read for introduction to the lectures I have this year arranged for you, that on the Future of England, which I gave to the cadets at Woolwich in the first year of my Professorship here, 1869; and which is now placed as the main conclusion of the "Crown of Wild Olive": and with it, very attentively, the close of my inaugural lecture given here; for the matter, no less than the tenor of which, I was reproved by all my friends, as irrelevant and ill-judged;—which, nevertheless, is of all the pieces of teaching I have ever given from this chair, the most pregnant and essential to whatever studies, whether of Art or Science, you may pursue, in this place or elsewhere, during your lives.

The opening words of that passage I will take leave to read to you again,—for they must still be the ground of whatever help I can give you, worth your acceptance.

"There is a destiny now possible to us—the highest ever set before a nation to be accepted or refused. We are still undegenerate in race: a race mingled of the best northern blood. We are not yet dissolute in temper, but still have the firmness to govern, and the grace to obey. We have been taught a religion of pure mercy, which we must either now finally betray, or learn to defend by fulfilling. And we are rich in an inheritance of honour, bequeathed to us through a thousand years of noble history, which it should be our daily thirst to increase with splendid avarice; so that Englishmen, if it be a sin to covet honour, should be the most offending souls alive. Within the last few years we have had the laws of natural science opened to us with a rapidity which has been blinding by its brightness; and means of transit and communication given to us, which have made but one kingdom of the habitable globe.