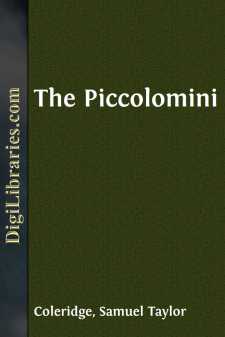 The two dramas,—PICCOLOMINI, or the first part of WALLENSTEIN, and the DEATH OF WALLENSTEIN, are introduced in the original manuscript by a prelude in one act, entitled WALLENSTEIN'S CAMP. This is written in rhyme, and in nine-syllable verse, in the same lilting metre (if that expression may be permitted), with the second Eclogue of Spenser's Shepherd's Calendar.

This prelude possesses a sort of broad humor, and is not deficient in character: but to have translated it into prose, or into any other metre than that of the original, would have given a false idea both of its style and purport; to have translated it into the same metre would have been incompatible with a faithful adherence to the sense of the German from the comparative poverty of our language in rhymes; and it would have been unadvisable, from the incongruity of those lax verses with the present taste of the English public. Schiller's intention seems to have been merely to have prepared his reader for the tragedies by a lively picture of laxity of discipline and the mutinous dispositions of Wallenstein's soldiery. It is not necessary as a preliminary explanation. For these reasons it has been thought expedient not to translate it.

The admirers of Schiller, who have abstracted their idea of that author from the Robbers, and the Cabal and Love, plays in which the main interest is produced by the excitement of curiosity, and in which the curiosity is excited by terrible and extraordinary incident, will not have perused without some portion of disappointment the dramas, which it has been my employment to translate. They should, however, reflect that these are historical dramas taken from a popular German history; that we must, therefore, judge of them in some measure with the feelings of Germans; or, by analogy, with the interest excited in us by similar dramas in our own language. Few, I trust, would be rash or ignorant enough to compare Schiller with Shakspeare; yet, merely as illustration, I would say that we should proceed to the perusal of Wallenstein, not from Lear or Othello, but from Richard II., or the three parts of Henry VI. We scarcely expect rapidity in an historical drama; and many prolix speeches are pardoned from characters whose names and actions have formed the most amusing tales of our early life. On the other hand, there exist in these plays more individual beauties, more passages whose excellence will bear reflection than in the former productions of Schiller. The description of the Astrological Tower, and the reflections of the Young Lover, which follow it, form in the original a fine poem; and my translation must have been wretched indeed if it can have wholly overclouded the beauties of the scene in the first act of the first play between Questenberg, Max, and Octavio Piccolomini. If we except the scene of the setting sun in the Robbers, I know of no part in Schiller's plays which equals the first scene of the fifth act of the concluding plays. [In this edition, scene iii., act v.] It would be unbecoming in me to be more diffuse on this subject....