The Pianoforte Sonata Its Origin and Development 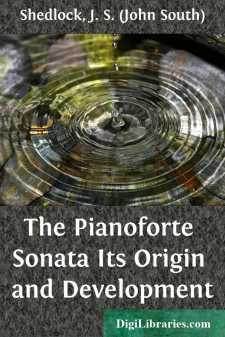 In history we find certain names associated with great movements: Luther with the Reformation, or Garibaldi with the liberation of Italy. Luther certainly posted on the door of the church at Wittenberg his famous Theses, and burnt the Papal Bull at the gates of that city; yet before Luther there lived men, such as the scholar Erasmus, who have been appropriately named Reformers before the Reformation. So, too, Cavour's cautious policy paved the way for Garibaldi's brilliant victories. Once again, Leonardo da Vinci is named as the inventor of chiaroscuro, yet he was preceded by Fra Filippo Lippi. And in similar manner, in music, certain men are associated with certain forms. Haydn, for example, is called the father of the quartet; close investigation, however, would show that he was only a link, and certainly not the first one in a long evolution. So, too, with the sonata. The present volume is, however, specially concerned with the clavier or pianoforte sonata; and for that we have a convenient starting-point—the Sonata in B flat of Kuhnau, published in 1695. The date is easy to remember, for in that same year died England's greatest musician, Henry Purcell.

Before studying the history of the pianoforte sonata, even in outline, it is essential that something should be said about the early history of the sonata. That term appears first to have been used in contradistinction to cantata: the one was a piece sounded (suonata, from sonando) by instruments; the other, one sung by voices. The form of these early sonatas (as they appear in Giovanni Gabrieli's works towards the close of the sixteenth century) was vague; yet, in spite of light imitations, the basis was harmonic, rather than contrapuntal. They were among the first fruits of the Renaissance in Italy. But soon there came about a process of differentiation. Praetorius, in his Syntagma musicum, published at Wolfenbüttel in 1619, distinguishes between the sonata and the canzona. Speaking generally, from the one seems to have come the sonata proper; from the other, the suite. During the whole of the eighteenth century there was a continual intercrossing of these two species; it is no easy matter, therefore, to trace the early stages of development of each separately.

Marpurg, in his description of various kinds of pieces in his Clavierstücke, published at Berlin in 1762, says: "Sonatas are pieces in three or four movements, marked merely Allegro, Adagio, Presto, etc., although in character they may be really an Allemande, Courante, and Gigue." Corelli, as will be mentioned later on, gave dance titles in addition to Allegro, Adagio, etc. Marpurg also states that "when the middle movement is in slow time it is not always in the key of the first and last movements." This, again, shows intercrossing. The genuine suite consisted of several dance movements (Allemande, Courante, Sarabande, Gigue) all in the same key. But we find occasionally in suites, a Fugue or Fuguetta, or even an Aria or Adagio; and in name, at any rate, one dance movement has formed part of the sonata since the time of Emanuel Bach.

In 1611, Banchieri, an Olivetan monk, published at Venice his L'Organo suonarino, a work "useful and necessary to organists,"—thus runs the title-page. At the end of the volume there are some pieces, vocal and instrumental (a Concerto for soprano or tenor, with organ, a Fantasia, Ricercata, etc.), among which are to be found two sonatas, the one entitled, "Prima Sonata, doppio soggietto," the other "Seconda Sonata, soggietto triplicato." They are written out in open score of four staves, with mezzo-soprano, alto, tenor, and bass clefs. To show how the sonatas of those days differed both in form and contents from the sonata of our century, the first of the above-mentioned is given in short score. It will, probably, remind readers of "the first (i.e....