The Physiology of Marriage, Part 2 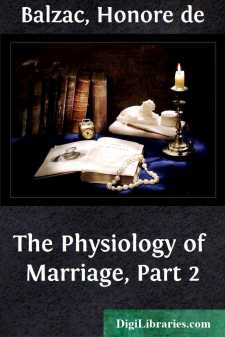 When a man reaches the position in which the first part of this book sets him, we suppose that the idea of his wife being possessed by another makes his heart beat, and rekindles his passion, either by an appeal to his amour propre, his egotism, or his self-interest, for unless he is still on his wife's side, he must be one of the lowest of men and deserves his fate.

In this trying moment it is very difficult for a husband to avoid making mistakes; for, with regard to most men, the art of ruling a wife is even less known than that of judiciously choosing one. However, marital policy consists chiefly in the practical application of three principles which should be the soul of your conduct. The first is never to believe what a woman says; the second, always to look for the spirit without dwelling too much upon the letter of her actions; and the third, not to forget that a woman is never so garrulous as when she holds her tongue, and is never working with more energy than when she keeps quiet.

From the moment that your suspicions are aroused, you ought to be like a man mounted on a tricky horse, who always watches the ears of the beast, in fear of being thrown from the saddle.

But art consists not so much in the knowledge of principles, as in the manner of applying them; to reveal them to ignorant people is to put a razor in the hand of a monkey. Moreover, the first and most vital of your duties consists in perpetual dissimulation, an accomplishment in which most husbands are sadly lacking. In detecting the symptoms of minotaurism a little too plainly marked in the conduct of their wives, most men at once indulge in the most insulting suspicions. Their minds contract a tinge of bitterness which manifests itself in their conversation, and in their manners; and the alarm which fills their heart, like the gas flame in a glass globe, lights up their countenances so plainly, that it accounts for their conduct.

Now a woman, who has twelve hours more than you have each day to reflect and to study you, reads the suspicion written upon your face at the very moment that it arises. She will never forget this gratuitous insult. Nothing can ever remedy that. All is now said and done, and the very next day, if she has opportunity, she will join the ranks of inconsistent women.

You ought then to begin under these circumstances to affect towards your wife the same boundless confidence that you have hitherto had in her. If you begin to lull her anxieties by honeyed words, you are lost, she will not believe you; for she has her policy as you have yours. Now there is as much need for tact as for kindliness in your behavior, in order to inculcate in her, without her knowing it, a feeling of security, which will lead her to lay back her ears, and prevent you from using rein or spur at the wrong moment.

But how can we compare a horse, the frankest of all animals, to a being, the flashes of whose thought, and the movements of whose impulses render her at moments more prudent than the Servite Fra-Paolo, the most terrible adviser that the Ten at Venice ever had; more deceitful than a king; more adroit than Louis XI; more profound than Machiavelli; as sophistical as Hobbes; as acute as Voltaire; as pliant as the fiancee of Mamolin; and distrustful of no one in the whole wide world but you...?