The Physiology of Marriage, Part 1 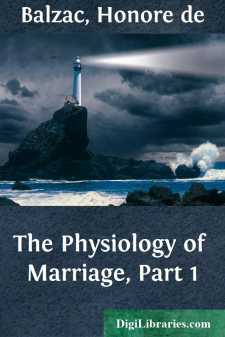 "Marriage must therefore undergo the gradual development towards perfection to which all human affairs submit."

These words, pronounced in the presence of the Conseil d'Etat by Napoleon during the discussion of the civil code, produced a profound impression upon the author of this book; and perhaps unconsciously he received the suggestion of this work, which he now presents to the public. And indeed at the period during which, while still in his youth, he studied French law, the word ADULTERY made a singular impression upon him. Taking, as it did, a prominent place in the code, this word never occurred to his mind without conjuring up its mournful train of consequences. Tears, shame, hatred, terror, secret crime, bloody wars, families without a head, and social misery rose like a sudden line of phantoms before him when he read the solemn word ADULTERY! Later on, when he became acquainted with the most cultivated circles of society, the author perceived that the rigor of marriage laws was very generally modified by adultery. He found that the number of unhappy homes was larger than that of happy marriages. In fact, he was the first to notice that of all human sciences that which relates to marriage was the least progressive. But this was the observation of a young man; and with him, as with so many others, this thought, like a pebble flung into the bosom of a lake, was lost in the abyss of his tumultuous thoughts. Nevertheless, in spite of himself the author was compelled to investigate, and eventually there was gathered within his mind, little by little, a swarm of conclusions, more or less just, on the subject of married life. Works like the present one are formed in the mind of the author with as much mystery as that with which truffles grow on the scented plains of Perigord. Out of the primitive and holy horror which adultery caused him and the investigation which he had thoughtlessly made, there was born one morning a trifling thought in which his ideas were formulated. This thought was really a satire upon marriage. It was as follows: A husband and wife found themselves in love with each other for the first time after twenty-seven years of marriage.

He amused himself with this little axiom and passed a whole week in delight, grouping around this harmless epigram the crowd of ideas which came to him unconsciously and which he was astonished to find that he possessed. His humorous mood yielded at last to the claims of serious investigation. Willing as he was to take a hint, the author returned to his habitual idleness. Nevertheless, this slight germ of science and of joke grew to perfection, unfostered, in the fields of thought. Each phase of the work which had been condemned by others took root and gathered strength, surviving like the slight branch of a tree which, flung upon the sand by a winter's storm, finds itself covered at morning with white and fantastic icicles, produced by the caprices of nightly frosts. So the sketch lived on and became the starting point of myriad branching moralizations....