The Philosophy of the Conditioned 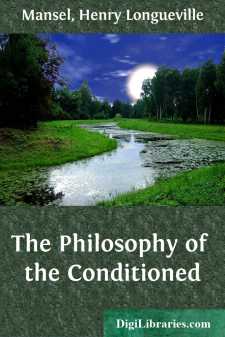 THE PHILOSOPHY OF THE CONDITIONED.

The reader of Plato’s Republic will readily recall to mind that wonderful passage at the end of the sixth book, in which the philosopher, under the image of geometrical lines, exhibits the various relations of the intelligible to the sensible world; especially his lofty aspirations with regard to “that second segment of the intelligible world, which reason of itself grasps by the power of dialectic, employing hypotheses, not as principles, but as veritable hypotheses, that is to say, as steps and starting-points, in order that it may ascend as far as the unconditioned (μÎ­χρι τοá¿¦ á¼€νυποθÎ­του), to the first principle of the universe, and having grasped this, may then lay hold of the principles next adjacent to it, and so go down to the end, using no sensible aids whatever, but employing abstract forms throughout, and terminating in forms.”

This quotation is important for our present purpose in two ways. In the first place, it may serve, at the outset of our remarks, to propitiate those plain-spoken English critics who look upon new terms in philosophy with the same suspicion with which Jack Cade regarded “a noun and a verb, and such abominable words as no Christian ear can endure to hear,” by showing that the head and front of our offending, “the Unconditioned,” is no modern invention of Teutonic barbarism, but sanctioned even by the Attic elegance of a Plato. And in the second place, it contains almost a history in miniature of the highest speculations of philosophy, both in earlier and in later times, and points out, with a clearness and precision the more valuable because uninfluenced by recent controversies, the exact field on which the philosophies of the Conditioned and the Unconditioned come into collision, and the nature of the problem which they both approach from opposite sides.

What is the meaning of this problem, the solution of which Plato proposes as the highest aim of philosophy—“to ascend to the unconditioned, and thence to deduce the universe of conditioned existence?” The problem has assumed different forms at different times: at present we must content ourselves with stating it in that in which it will most naturally suggest itself to a student of modern philosophy, and in which it has the most direct bearing on the subject of the present article.

All consciousness must in the first instance present itself as a relation between two constituent parts, the person who is conscious, and the thing, whatever it may be, of which he is conscious. This contrast has been indicated, directly or indirectly, by various names—mind and matter; person and thing; subject and object; or, lastly, in the distinction, most convenient for philosophy, however uncouth in sound, between self and not self—the ego and the non-ego. In order to be conscious at all, I must be conscious of something: consciousness thus presents itself as the product of two factors, I and something. The problem of the unconditioned is, briefly stated, to reduce these two factors to one....