The Philosophy of Teaching The Teacher, The Pupil, The School 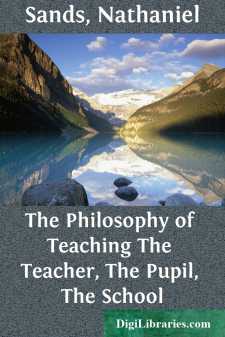 Of the various callings to which the division of labor has caused man specially to devote himself, there is none to be compared for nobility or usefulness with that of the true teacher. Yet neither teachers nor people at present realize this truth.

Among the very few lessons of value which might be derived from so-called “classical” studies, is that of the proper estimate in which the true teacher should be held; for among the Greeks no calling or occupation was more honored. Yet with a strange perversity, albeit for centuries the precious time of youth has been wasted, and the minds and morals of the young perverted by “classical” studies, this one lesson has been disregarded.

What duty can be more responsible, what vocation more holy, than that of training the young in habits of industry, truthfulness, economy, and sobriety; of giving to them that knowledge and skill without which their lives would become a burden to themselves and to society? Yet, while the merchant seeks to exercise the greatest caution in selecting the persons to whom he intrusts his merchandise, and yields respect to him who faithfully performs his commercial engagements; he makes but scant inquiry as to the character or qualifications of the mind-builder upon whose skill, judgment, and trustworthiness the future of his children will greatly depend.

The position assigned by our social rules to the teacher accords, not with the nobility of his functions, but with the insufficient appreciation entertained of them by the people, and is accompanied by a corresponding inadequate remuneration. And what is the result? Except a few single-hearted, noble men and women, by whom the profession of the teacher is illustrated and adorned; except a few self-sacrificing heroes and heroines whose love of children and of mankind reconciles them to an humble lot and ill-requited labors, the class of school-teachers throughout the whole civilized world barely reaches the level of that mediocrity which in all other callings suffices to obtain not merely a comfortable maintenance in the present, but a provision against sickness and for old age.

What aspiring father, what Cornelia among mothers, select for their children the profession of a teacher as a field in which the talents and just ambition of such children may find scope? Nor can we hope for any improvement until a juster appreciation of the nobility of the teacher’s vocation, and a more generous remuneration of his labors shall generally prevail.

It is to the desire to aid somewhat in bringing about a juster appreciation in the minds alike of teachers and of people of the utility and nobleness of the teacher’s labors and vocation that these pages owe their origin.

When we consider the nature of the Being over whose future the teacher is to exercise so great an influence, whose mind he is to store with knowledge, and whom he is to train in the practice of such conduct as shall lead to his happiness and well-being, we are lost in amazement at the extent of the knowledge and perfection of the moral attributes which should have been acquired by the teacher....