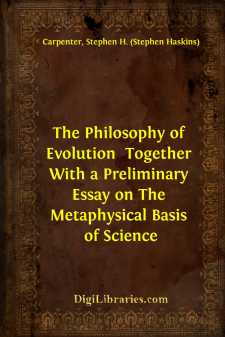 All knowledge is essentially one. The object-matter upon which intellect exerts itself, does not affect the subjective act of knowing. Physics, when stripped of that which is merely contingent, becomes metaphysics. Physical science deals with object-matter, and discusses the signs by which nature communicates her message—that is, phenomena. Metaphysical science has to do with the subject-mind, and discusses the meaning of the message. The one converts God's hieroglyphics into easily-intelligible language; the other translates this language into Idea. If this be true, there must be a unity of method in all science, however great the diversity of the object-matter investigated. This method is subjectively determined, that is, by the constitution of the mind, and not by the particular form of matter upon which intellectual energy may be exerted. If there is an essential unity in all knowledge, it is because there is a corresponding unity of method in all mental activity. It is only when we look upon what is to be known, that truth separates into sciences; but particular truths become particular sciences only under assumed relations to the whole of which they form a part.

Objectively considered, science is classified knowledge; subjectively viewed, it is the laws or principles according to which knowledge is classified. Every actor implies an act—every thinker a thought. We may therefore universally make this dual classification, according as we view the mental operation involved, or the attributes of objects which form the subject of thought. The possibility of science is conditioned upon the possibility of classification. Mere knowledge is not science, as the world ought to have learned by costly experience. Even classified knowledge may not be science; it becomes science not through previous classification, but in the act of being classified, and therefore only as the principle of classification is apprehended—that is, only as the particular application of the law of generalization is distinctly recognized. A man may know a book and know nothing more; he knows the science only when he is capable of making the book for himself. Mere knowledge thus differs from science in that the one is held only by the apprehensive powers of the mind, while the other passes beyond these into the reflective or ratiocinative. Pure science, then, must be wholly abstract. The forms and substances of Nature with which the scientific student deals, are only the discrete figures of the young mathematician, to be thrown aside with advancing knowledge. Matter is only the staff on which the mind leans, while too feeble to go alone. It is not the finely chiseled statue that renders a man a sculptor; it is the conception which is therein embodied. A day-laborer may have cut the stone, but only the artist could conceive the idea. So in science, we care but little for the particular results at which we arrive, compared with the laws, according to which the results have been attained.

But conceptions cannot be communicated without being rendered objective. The ideal of the artist is locked up in his own mind, until on canvas, in marble, or by means of some other physical symbol, he communicates his high imaginings. Matter, then, according to the present constitution of things is the condition of intellectual communication. Law cannot be studied as abstract law; it can be studied only while acting, and that which exhibits this activity must be matter—something which will always and uniformly obey. There can be no conception of force except as acting, and the sole medium of such activity is matter. Thus again, matter is the condition of all communication from nature to man. Science is thus, in a measure, determined by the conditions of its discovery and communication. But we must distinguish between an invariable condition and that which is thus conditioned. Matter is not science; it is only the condition of its discovery and communication. Air is not hearing; it is the condition of hearing. We do not study matter for the sake of the matter when we study science, but for the sake of the law communicated to us in these changes of matter, and Law is a metaphysical, not a physical idea....