The Perpetuation of Living Beings; hereditary transmission and variation 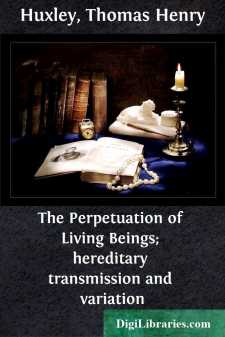 The inquiry which we undertook, at our last meeting, into the state of our knowledge of the causes of the phenomena of organic nature,—of the past and of the present,—resolved itself into two subsidiary inquiries: the first was, whether we know anything, either historically or experimentally, of the mode of origin of living beings; the second subsidiary inquiry was, whether, granting the origin, we know anything about the perpetuation and modifications of the forms of organic beings. The reply which I had to give to the first question was altogether negative, and the chief result of my last lecture was, that, neither historically nor experimentally, do we at present know anything whatsoever about the origin of living forms. We saw that, historically, we are not likely to know anything about it, although we may perhaps learn something experimentally; but that at present we are an enormous distance from the goal I indicated.

I now, then, take up the next question, What do we know of the reproduction, the perpetuation, and the modifications of the forms of living beings, supposing that we have put the question as to their origination on one side, and have assumed that at present the causes of their origination are beyond us, and that we know nothing about them? Upon this question the state of our knowledge is extremely different; it is exceedingly large, and, if not complete, our experience is certainly most extensive. It would be impossible to lay it all before you, and the most I can do, or need do to-night, is to take up the principal points and put them before you with such prominence as may subserve the purposes of our present argument.

The method of the perpetuation of organic beings is of two kinds,—the asexual and the sexual. In the first the perpetuation takes place from and by a particular act of an individual organism, which sometimes may not be classed as belonging to any sex at all. In the second case, it is in consequence of the mutual action and interaction of certain portions of the organisms of usually two distinct individuals,—the male and the female. The cases of asexual perpetuation are by no means so common as the cases of sexual perpetuation; and they are by no means so common in the animal as in the vegetable world. You are all probably familiar with the fact, as a matter of experience, that you can propagate plants by means of what are called "cuttings;" for example, that by taking a cutting from a geranium plant, and rearing it properly, by supplying it with light and warmth and nourishment from the earth, it grows up and takes the form of its parent, having all the properties and peculiarities of the original plant.

Sometimes this process, which the gardener performs artificially, takes place naturally; that is to say, a little bulb, or portion of the plant, detaches itself, drops off, and becomes capable of growing as a separate thing. That is the case with many bulbous plants, which throw off in this way secondary bulbs, which are lodged in the ground and become developed into plants. This is an asexual process, and from it results the repetition or reproduction of the form of the original being from which the bulb proceeds.

Among animals the same thing takes place. Among the lower forms of animal life, the infusorial animalculae we have already spoken of throw off certain portions, or break themselves up in various directions, sometimes transversely or sometimes longitudinally; or they may give off buds, which detach themselves and develop into their proper forms. There is the common fresh-water Polype, for instance, which multiplies itself in this way. Just in the same way as the gardener is able to multiply and reproduce the peculiarities and characters of particular plants by means of cuttings, so can the physiological experimentalist—as was shown by the Abbe Trembley many years ago—so can he do the same thing with many of the lower forms of animal life....