The Perils and Adventures of Harry Skipwith By Land and Sea 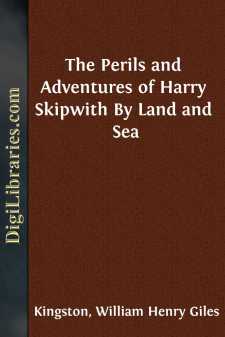 The love of travel was a family instinct, and was born with me. My maternal grandfather went to Central Africa—at least, he left us intending to do so, but never came back again. I had a great uncle who voyaged three times round the world, and one sailor uncle who, half a century ago, spent a winter at the North Pole along with Parry and Franklin. Then I had a cousin who was very ambitious of reaching the moon, and spent his life in studying its maps and making preparations for the journey, which, however, he never accomplished. When asked when he was going to start, he always replied that he had deferred his journey for six months—circumstances requiring his longer sojourn on this planet Tellus; but he never expressed the slightest doubt about his being able ultimately to accomplish his proposed journey. I held him in great respect (which was more than any of the rest of the family did); but as my ambition never soared beyond an expedition round this sublunary globe, I resolved as soon as possible to commence my travels in the hopes of having the start of him.

My voluntary studies were of a character to feed my taste. The travels of the famed Baron Munchausen, “Gulliver’s Travels,” those of Sir John Mandeville and Marco Polo, were read by me over and over again. I procured others of a more modern date, and calculated to give more correct information regarding the present state of the world; but I stuck to my old friends, and pictured the globe to myself much in the condition in which they described it. Not having the patience to wait till I grew up, I resolved at the commencement of my summer holidays to start by myself, hoping to come back before their termination, having a full supply of adventures to narrate. I was some days maturing my plans and making preparations for my journey. I had denied myself such luxuries as had been brought to our school by the pieman, and had saved up my pocket-money—an exercise of self-denial which proved the earnestness of my resolve. I had had too several presents made to me by relations and friends who happened to be in the house. I paid a visit also to my cousin, Booby Skipwith, as he was called. I did not confide to him all my plans; but I hinted that I had one of great importance in hand, and, to my great delight, he presented me with a five-pound note, observing that he believed that such things were not current in the moon, and that, therefore, he could dispense with them. I hinted that if such was the case he might hand me out a few more, for that where I was going they would be greatly in demand; but it proved that this was the only one of which he was possessed.

I had got a small portmanteau, into which I packed all my best clothes and valuables, with a few glass beads and knives which I had purchased to bestow on any savages I might encounter. I had a lance-head brought home by my great uncle. With this I purposed manufacturing a lance for my defence. I knew that, as England is an island, I must cross the water. My idea, when on the other side, whether north, south, east, or west I did not care, was to purchase two steeds—one for myself and another for my luggage and a squire, whom I intended to find. I was certain that he would turn up somewhere, and be very faithful and brave. The first, thing, however, was to get away from home. I wrote an affectionate letter to my father, telling him that I was going on my travels as my ancestor had done, and that I should be back, I hoped, by the end of the holidays; that if I was not, it could not much signify, as I should be gaining more information from my intercourse with the great world than I could possibly hope to reap from the instruction of Dr Bumpus.

This done, one very fine morning I crept out of the house with my portmanteau on my shoulders, and getting over the park palings, so as not to be seen by the lodge-keeper, I stood ready for a coach that would pass by, I had ascertained, about that time. I waited anxiously, thinking that it must have already passed. At last I saw it coming along the road in a cloud of dust....