The Perfect Wagnerite, Commentary on the Ring 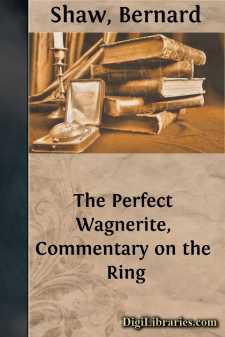 Let me assume for a moment that you are a young and good-looking woman. Try to imagine yourself in that character at Klondyke five years ago. The place is teeming with gold. If you are content to leave the gold alone, as the wise leave flowers without plucking them, enjoying with perfect naivete its color and glitter and preciousness, no human being will ever be the worse for your knowledge of it; and whilst you remain in that frame of mind the golden age will endure.

Now suppose a man comes along: a man who has no sense of the golden age, nor any power of living in the present: a man with common desires, cupidities, ambitions, just like most of the men you know. Suppose you reveal to that man the fact that if he will only pluck this gold up, and turn it into money, millions of men, driven by the invisible whip of hunger, will toil underground and overground night and day to pile up more and more gold for him until he is master of the world! You will find that the prospect will not tempt him so much as you might imagine, because it involves some distasteful trouble to himself to start with, and because there is something else within his reach involving no distasteful toil, which he desires more passionately; and that is yourself. So long as he is preoccupied with love of you, the gold, and all that it implies, will escape him: the golden age will endure. Not until he forswears love will he stretch out his hand to the gold, and found the Plutonic empire for himself. But the choice between love and gold may not rest altogether with him. He may be an ugly, ungracious, unamiable person, whose affections may seem merely ludicrous and despicable to you. In that case, you may repulse him, and most bitterly humiliate and disappoint him. What is left to him then but to curse the love he can never win, and turn remorselessly to the gold? With that, he will make short work of your golden age, and leave you lamenting its lost thoughtlessness and sweetness.

In due time the gold of Klondyke will find its way to the great cities of the world. But the old dilemma will keep continually reproducing itself. The man who will turn his back on love, and upon all the fruitful it, and will set himself single-heartedly to gather gold in an exultant dream of wielding its Plutonic powers, will find the treasure yielding quickly to his touch. But few men will make this sacrifice voluntarily. Not until the Plutonic power is so strongly set up that the higher human impulses are suppressed as rebellious, and even the mere appetites are denied, starved, and insulted when they cannot purchase their satisfaction with gold, are the energetic spirits driven to build their lives upon riches. How inevitable that course has become to us is plain enough to those who have the power of understanding what they see as they look at the plutocratic societies of our modern capitals.

Here, then, is the subject of the first scene of The Rhine Gold. As you sit waiting for the curtain to rise, you suddenly catch the booming ground-tone of a mighty river....