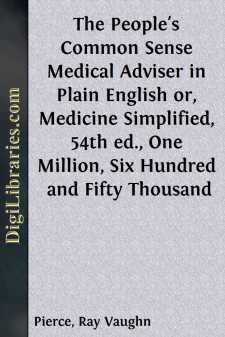 In this chapter we propose to consider Life in its primitive manifestations. Biology is the science of living bodies, or the science of life. Every organ of a living body has a function to perform, and Physiology treats of these functions.

Function means the peculiar action of some particular organ or part. There can be no vital action without change, and no change without organs. Every living thing has a structure, and Anatomy treats of the structures of organized bodies. Several chapters of this work are devoted to Physiological Anatomy, which treats of the human organism and its functions.

The beginning of life is called generation; its perpetuation, reproduction. By the former function, individual life is insured; by the latter, it is maintained. Since nutrition sustains life, it has been pertinently termed perpetual reproduction.

Latent Life is contained in a small globule, a mere atom of matter, in the sperm-cell. This element is something which, under certain conditions, develops into a living organism. The entire realm of nature teems with these interesting phenomena, thus manifesting that admirable adjustment of internal to external relations, which claims our profound attention. We are simply humble scholars, waiting on the threshold of nature's glorious sanctuary, to receive the interpretation of her divine mysteries.

Some have conjectured that chemical and physical forces account for all the phenomena of life, and that organization is not the result of vital forces. Physical science cannot inform us what the beginning was, or how vitality is the result of chemical forces; nor can it tell us what transmutations will occur at the end of organized existence. This mysterious life-principle eludes the grasp of the profoundest scientists, and its presence in the world will ever continue to be an astonishing and indubitable testimony of Divine Power.

The physical act of generation is accomplished by the union of two cells; and as this conjugation is known to be so generally indispensable to the organization of life, we may fairly infer that it is a universal necessity. Investigations with the microscope have destroyed the hypothesis of "spontaneous generation." These show us that even the minutest living forms are derived from a parent organization.

Generation. So long as the vital principle remains in the sperm-cell, it lies dormant. That part of the cell which contains this principle is called the spermatozoön, which consists of a flattened body, having a long appendage tapering to the finest point. If it be remembered that a line is the one-twelfth part of an inch in length, some idea may be formed of the extreme minuteness of the body of a human spermatozoön, when we state that it is from 1/800 to 1/600 part of a line, and the filiform tail 1/50 of a line, in length. This life-atom, which can be discerned only with a powerful magnifying glass, is perfectly transparent, and moves about by executing a vibratile motion with its long appendage. Within this speck of matter are hidden the multifarious forces which, under certain favorable conditions, result in organization. Magnify this infinitesimal atom a thousand times, and no congeries of formative powers is perceived wherewith to work out the wonders of its existence. Yet it contains the principle, which is the contribution on the part of the male toward the generation of a new being.

The ovum or germ-cell, is the special contribution on the part of the female for the production of another being. The human ovum, though larger than the spermatozoön, is also extremely small, measuring not more than from 1/20 to 1/10 of a line, or from 1/240 to 1/120 of an inch, in diameter.

The sperm and the germ-cells contain the primary elements of all organic structures, and both possess the special qualities and conditions by which they may evolve organic beings....