The Pedler of Dust Sticks 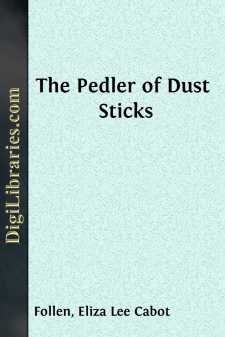 THE PEDLER OF DUST STICKS.

One day I went to visit a friend, a lady, who came from Hamburg, in Germany. I was much pleased with a portrait which was hanging up in her room, and I was particularly struck by the ornamental drawings with which the picture was surrounded. They consisted of whip handles, canes, piano keys, mouth-pieces for wind instruments, all sorts of umbrellas, and many more things, of every sort, made of cane and whalebone. The arrangement was so ingenious, the designs so fanciful, and the execution so good, that nothing could be prettier. But what of course was of the most importance, was the face and head that they were meant to ornament. "What a benevolent, what a beautiful face!" I said. "Who is it?"

"My father," the lady replied; "and he is more beautiful than the picture, and he is still more kind than he looks there."

"What is the meaning of all these bits of bamboo and these little canes, so fancifully arranged around the picture?" I asked.

"These little sticks," she replied, "tell the story of my father's success, and of the beginning of his greatness. He began his noble and honorable life as a little Pedler of Dust Sticks."

"Yes," she said; "if you would like to hear his history, I will relate it."

I replied that nothing could please me better; that I considered the life of a good, great man the most beautiful of all stories.

"I will tell it to you just as it was; and you may, if you please, repeat it for the benefit of any one."

When I had returned home I wrote the story down, just as I remembered it, as she had given me leave to do.

The Christian name of our hero was Henry, and so we will call him. His parents lived in Hamburg, in Germany. They were very poor. His father was a cabinet maker, with a very small business. Henry was the second of eight children. As soon as he was eight years old, his father, in order to raise a few more shillings to support his family, sent him into the streets to sell little pieces of ratan, which the people there use to beat the dust out of their clothes.

Henry got about a cent and a half apiece for the sticks. If he sold a great number of these little sticks, he was allowed, as a reward, to go to an evening school, where he could learn to read. This was a great pleasure to him; but he wanted also to learn to write. For this, however, something extra was to be paid, and Henry was very anxious to earn more, that he might have this advantage.

There is a fine public walk in Hamburg, where the fashionable people go, in good weather, to see and be seen; and where the young men go to wait upon and see the ladies. These gentlemen were fond of having little canes in their hands, to play with, to switch their boots with, and to show the young ladies how gracefully they could move their arms; and sometimes to write names in the sand. So little Henry thought of making some very pretty canes, and selling them to these young beaux.

He soaked his canes for a long time in warm water, and bent the tops round for a handle, and then ornamented them with his penknife, and made them really very pretty....