The Patrol of the Sun Dance Trail 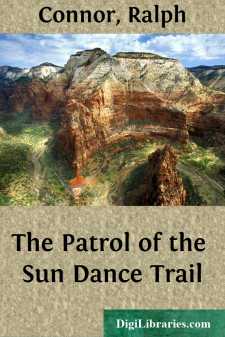 High up on the hillside in the midst of a rugged group of jack pines the Union Jack shook out its folds gallantly in the breeze that swept down the Kicking Horse Pass. That gallant flag marked the headquarters of Superintendent Strong, of the North West Mounted Police, whose special duty it was to preserve law and order along the construction line of the Canadian Pacific Railway Company, now pushed west some scores of miles.

Along the tote-road, which ran parallel to the steel, a man, dark of skin, slight but wiry, came running, his hard panting, his streaming face, his open mouth proclaiming his exhaustion. At a little trail that led to the left he paused, noted its course toward the flaunting flag, turned into it, then struggled up the rocky hillside till he came to the wooden shack, with a deep porch running round it, and surrounded by a rustic fence which enclosed a garden whose neatness illustrated a characteristic of the British soldier. The runner passed in through the gate and up the little gravel walk and began to ascend the steps.

"Halt!" A quick sharp voice arrested him. "What do you want here?" From the side of the shack an orderly appeared, neat, trim and dandified in appearance, from his polished boots to his wide cowboy hat.

The orderly looked him over and hesitated.

"What do you want Big Chief for?"

"Me—want—say somet'ing," said the little man, fighting to recover his breath, "somet'ing beeg—sure beeg." He made a step toward the door.

"Halt there!" said the orderly sharply. "Keep out, you half-breed!"

"See—beeg Chief—queeck," panted the half-breed, for so he was, with fierce insistence.

The orderly hesitated. A year ago he would have hustled him off the porch in short order. But these days were anxious days. Rumors wild and terrifying were running through the trails of the dark forest. Everywhere were suspicion and unrest. The Indian tribes throughout the western territories and in the eastern part of British Columbia, under cover of an unwonted quiet, were in a state of excitement, and this none knew better than the North West Mounted Police. With stoical unconcern the Police patroled their beats, rode in upon the reserves, careless, cheery, but with eyes vigilant for signs and with ears alert for sounds of the coming storm. Only the Mounted Police, however, and a few old-timers who knew the Indians and their half-breed kindred gave a single moment's thought to the bare possibility of danger. The vast majority of the Canadian people knew nothing of the tempestuous gatherings of French half-breed settlers in little hamlets upon the northern plains along the Saskatchewan. The fiery resolutions reported now and then in the newspapers reciting the wrongs and proclaiming the rights of these remote, ignorant, insignificant, half-tamed pioneers of civilization roused but faint interest in the minds of the people of Canada. Formal resolutions and petitions of rights had been regularly sent during the past two years to Ottawa and there as regularly pigeon-holed above the desks of deputy ministers....