The Path Of Duty 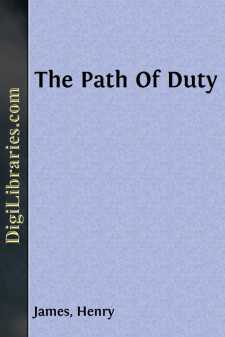 I am glad I said to you the other night at Doubleton, inquiring—too inquiring—compatriot, that I wouldn't undertake to tell you the story (about Ambrose Tester), but would write it out for you; inasmuch as, thinking it over since I came back to town, I see that it may really be made interesting. It is a story, with a regular development, and for telling it I have the advantage that I happened to know about it from the first, and was more or less in the confidence of every one concerned. Then it will amuse me to write it, and I shall do so as carefully and as cleverly as possible The first winter days in London are not madly gay, so that I have plenty of time; and if the fog is brown outside, the fire is red within. I like the quiet of this season; the glowing chimney-corner, in the midst of the December mirk, makes me think, as I sit by it, of all sorts of things. The idea that is almost always uppermost is the bigness and strangeness of this London world. Long as I have lived here,—the sixteenth anniversary of my marriage is only ten days off,—there is still a kind of novelty and excitement in it It is a great pull, as they say here, to have remained sensitive,—to have kept one's own point of view. I mean it's more entertaining,—it makes you see a thousand things (not that they are all very charming). But the pleasure of observation does not in the least depend on the beauty of what one observes. You see innumerable little dramas; in fact, almost everything has acts and scenes, like a comedy. Very often it is a comedy with tears. There have been a good many of them, I am afraid, in the case I am speaking of. It is because this history of Sir Ambrose Tester and Lady Vandeleur struck me, when you asked me about the relations of the parties, as having that kind of progression, that when I was on the point of responding, I checked myself, thinking it a pity to tell you a little when I might tell you all. I scarcely know what made you ask, inasmuch as I had said nothing to excite your curiosity. Whatever you suspected, you suspected on your own hook, as they say. You had simply noticed the pair together that evening at Doubleton. If you suspected anything in particular, it is a proof that you are rather sharp, because they are very careful about the way they behave in public. At least they think they are. The result, perhaps, doesn't necessarily follow. If I have been in their confidence you may say that I make a strange use of my privilege in serving them up to feed the prejudices of an opinionated American. You think English society very wicked, and my little story will probably not correct the impression. Though, after all, I don't see why it should minister to it; for what I said to you (it was all I did say) remains the truth. They are treading together the path of duty. You would be quite right about its being base in me to betray them. It is very true that they have ceased to confide in me; even Joscelind has said nothing to me for more than a year. That is doubtless a sign that the situation is more serious than before, all round,—too serious to be talked about. It is also true that you are remarkably discreet, and that even if you were not it would not make much difference, inasmuch as if you were to repeat my revelations in America, no one would know whom you were talking about. But all the same, I should be base; and, therefore, after I have written out my reminiscences for your delectation, I shall simply keep them for my own. You must content yourself with the explanation I have already given you of Sir Ambrose Tester and Lady Vandeleur: they are following—hand in hand, as it were—the path of duty. This will not prevent me from telling everything; on the contrary, don't you see?

His brilliant prospects dated from the death of his brother, who had no children, had indeed steadily refused to marry. When I say brilliant prospects, I mean the vision of the baronetcy, one of the oldest in England, of a charming seventeenth-century house, with its park, in Dorsetshire, and a property worth some twenty thousand a year. Such a collection of items is still dazzling to me, even after what you would call, I suppose, a familiarity with British grandeur. My husband is n't a baronet (or we probably should n't be in London in December), and he is far, alas, from having twenty thousand a year. The full enjoyment of these luxuries, on Ambrose Tester's part, was dependent naturally, on the death of his father, who was still very much to the fore at the time I first knew the young man. The proof of it is the way he kept nagging at his sons, as the younger used to say, on the question of taking a wife. The nagging had been of no avail, as I have mentioned, with regard to Francis, the elder, whose affections were centred (his brother himself told me) on the winecup and the faro-table. He was not an exemplary or edifying character, and as the heir to an honorable name and a fine estate was very unsatisfactory indeed. It had been possible in those days to put him into the army, but it was not possible to keep him there; and he was still a very young man when it became plain that any parental dream of a "career" for Frank Tester was exceedingly vain. Old Sir Edmund had thought matrimony would perhaps correct him, but a sterner process than this was needed, and it came to him one day at Monaco—he was most of the time abroad—after an illness so short that none of the family arrived in time. He was reformed altogether, he was utterly abolished.

The second son, stepping into his shoes, was such an improvement that it was impossible there should be much simulation of mourning. You have seen him, you know what he is; there is very little mystery about him. As I am not going to show this composition to you, there is no harm in my writing here that he is—or at any rate he was—a remarkably attractive man. I don't say this because he made love to me, but precisely because he did n't. He was always in love with some one else,—generally with Lady Vandeleur. You may say that in England that usually does n't prevent; but Mr. Tester, though he had almost no intermissions, did n't, as a general thing, have duplicates. He was not provided with a second loved object, "under-studying," as they say, the part. It was his practice to keep me accurately informed of the state of his affections,—a matter about which he was never in the least vague. When he was in love he knew it and rejoiced in it, and when by a miracle he was not he greatly regretted it. He expatiated to me on the charms of other persons, and this interested me much more than if he had attempted to direct the conversation to my own, as regards which I had no illusions....