The Past Condition of Organic Nature 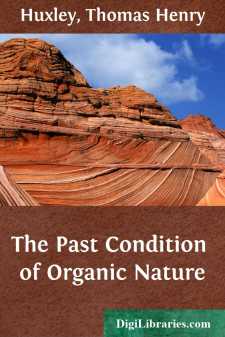 IN the lecture which I delivered last Monday evening, I endeavoured to sketch in a very brief manner, but as well as the time at my disposal would permit, the present condition of organic nature, meaning by that large title simply an indication of the great, broad, and general principles which are to be discovered by those who look attentively at the phenomena of organic nature as at present displayed. The general result of our investigations might be summed up thus: we found that the multiplicity of the forms of animal life, great as that may be, may be reduced to a comparatively few primitive plans or types of construction; that a further study of the development of those different forms revealed to us that they were again reducible, until we at last brought the infinite diversity of animal, and even vegetable life, down to the primordial form of a single cell.

We found that our analysis of the organic world, whether animals or plants, showed, in the long run, that they might both be reduced into, and were, in fact, composed of, the same constituents. And we saw that the plant obtained the materials constituting its substance by a peculiar combination of matters belonging entirely to the inorganic world; that, then, the animal was constantly appropriating the nitrogenous matters of the plant to its own nourishment, and returning them back to the inorganic world, in what we spoke of as its waste; and that finally, when the animal ceased to exist, the constituents of its body were dissolved and transmitted to that inorganic world whence they had been at first abstracted. Thus we saw in both the blade of grass and the horse but the same elements differently combined and arranged. We discovered a continual circulation going on,—the plant drawing in the elements of inorganic nature and combining them into food for the animal creation; the animal borrowing from the plant the matter for its own support, giving off during its life products which returned immediately to the inorganic world; and that, eventually, the constituent materials of the whole structure of both animals and plants were thus returned to their original source: there was a constant passage from one state of existence to another, and a returning back again.

Lastly, when we endeavoured to form some notion of the nature of the forces exercised by living beings, we discovered that they—if not capable of being subjected to the same minute analysis as the constituents of those beings themselves—that they were correlative with—that they were the equivalents of the forces of inorganic nature—that they were, in the sense in which the term is now used, convertible with them. That was our general result.

And now, leaving the Present, I must endeavour in the same manner to put before you the facts that are to be discovered in the Past history of the living world, in the past conditions of organic nature. We have, to-night, to deal with the facts of that history—a history involving periods of time before which our mere human records sink into utter insignificance—a history the variety and physical magnitude of whose events cannot even be foreshadowed by the history of human life and human phenomena—a history of the most varied and complex character.

We must deal with the history, then, in the first place, as we should deal with all other histories. The historical student knows that his first business should be to inquire into the validity of his evidence, and the nature of the record in which the evidence is contained, that he may be able to form a proper estimate of the correctness of the conclusions which have been drawn from that evidence. So, here, we must pass, in the first place, to the consideration of a matter which may seem foreign to the question under discussion. We must dwell upon the nature of the records, and the credibility of the evidence they contain; we must look to the completeness or incompleteness of those records themselves, before we turn to that which they contain and reveal....