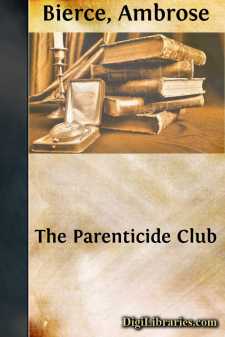 Having murdered my mother under circumstances of singular atrocity, I was arrested and put upon my trial, which lasted seven years. In charging the jury, the judge of the Court of Acquittal remarked that it was one of the most ghastly crimes that he had ever been called upon to explain away.

At this, my attorney rose and said:

"May it please your Honor, crimes are ghastly or agreeable only by comparison. If you were familiar with the details of my client's previous murder of his uncle you would discern in his later offense (if offense it may be called) something in the nature of tender forbearance and filial consideration for the feelings of the victim. The appalling ferocity of the former assassination was indeed inconsistent with any hypothesis but that of guilt; and had it not been for the fact that the honorable judge before whom he was tried was the president of a life insurance company that took risks on hanging, and in which my client held a policy, it is hard to see how he could decently have been acquitted. If your Honor would like to hear about it for instruction and guidance of your Honor's mind, this unfortunate man, my client, will consent to give himself the pain of relating it under oath."

The district attorney said: "Your Honor, I object. Such a statement would be in the nature of evidence, and the testimony in this case is closed. The prisoner's statement should have been introduced three years ago, in the spring of 1881."

"In a statutory sense," said the judge, "you are right, and in the Court of Objections and Technicalities you would get a ruling in your favor. But not in a Court of Acquittal. The objection is overruled."

"I except," said the district attorney.

"You cannot do that," the judge said. "I must remind you that in order to take an exception you must first get this case transferred for a time to the Court of Exceptions on a formal motion duly supported by affidavits. A motion to that effect by your predecessor in office was denied by me during the first year of this trial. Mr. Clerk, swear the prisoner."

The customary oath having been administered, I made the following statement, which impressed the judge with so strong a sense of the comparative triviality of the offense for which I was on trial that he made no further search for mitigating circumstances, but simply instructed the jury to acquit, and I left the court, without a stain upon my reputation:

"I was born in 1856 in Kalamakee, Mich., of honest and reputable parents, one of whom Heaven has mercifully spared to comfort me in my later years. In 1867 the family came to California and settled near Nigger Head, where my father opened a road agency and prospered beyond the dreams of avarice. He was a reticent, saturnine man then, though his increasing years have now somewhat relaxed the austerity of his disposition, and I believe that nothing but his memory of the sad event for which I am now on trial prevents him from manifesting a genuine hilarity.

"Four years after we had set up the road agency an itinerant preacher came along, and having no other way to pay for the night's lodging that we gave him, favored us with an exhortation of such power that, praise God, we were all converted to religion....