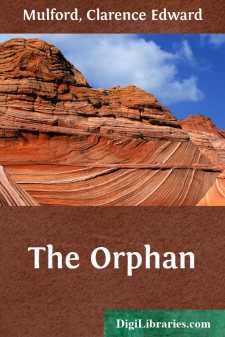 MANY men swore that The Orphan was bad, and many swore profanely and with wonderful command of epithets because he was bad, but for obvious reasons that was as far as the majority went to show their displeasure. Those of the minority who had gone farther and who had shown their hatred by rash actions only proved their foolishness; for they had indeed gone far and would return no more.

Tradition had it that The Orphan was a mongrel, a half-breed, asserting that his mother had been a Sioux with negro blood in her veins. It also asserted that his father had been nominated and unanimously elected, by a posse, to an elevated position under a tree; and further, that The Orphan himself had been born during a cloudburst at midnight on the thirteenth of the month. The latter was from the Mexicans, who found great delight in making such terrifying combinations of ill luck.

But tradition was strongly questioned as to his mother, for how could the son of such a mother be possessed of the dare-devil courage and grit which had made his name a synonym of terror? This contention was well stated and is borne out, for it can be authoritatively said that the mother of The Orphan was white, and had neither Indian nor negro blood in her veins, but on the contrary came from a family of gentlefolk. Thus I start aright by refuting slander. The Orphan was white, his profanity blue, and his anger red, and having started aright, I will continue with the events which led to the discovery of his innate better qualities and their final ascendency over the savagely hard nature which circumstances had bred in him. These events began on the day when James Shields, for reasons hereinafter set forth, became actively interested in his career.

Shields, by common consent Keeper of the Law over a territory as large as the State of New Jersey and whom out of courtesy I will call sheriff, was no coward, and neither was he a fool; and when word came to him that The Orphan had made a mess of two sheep herders near the U Bend of the Limping Water Creek, he did not forthwith pace the street and inform the citizens of Ford’s Station that he was about to start on a journey which had for its object the congratulation of The Orphan at long range. Upon occasions his taciturnity became oppressive, especially when grave dangers or tense situations demanded concentration of thought. The more he thought the less he talked, the one notable exception being when stirred to righteous anger by personal insults, in which case his words flowed smoothly along one channel while his thoughts gripped a single idea. To his acquaintances he varied as the mood directed, often saying practically nothing for hours, and at other times discoursing volubly. One thing, a word of his, had become proverbial–when Shields said “Hell!” he was in no mood for pleasantries, and the third repetition of the word meant red, red anger. He was a man of strong personality, who loved his friends in staunch, unswerving loyalty; and he tolerated his enemies until the last ditch had been reached.

He, like The Orphan, was essentially a humorist in the finest definition of the term, inasmuch as he could find humor in the worst possible situations. He was even now forcibly struck with the humor of his contemplated ride, for The Orphan would be so very much surprised to see him. He could picture the expression of weary toleration which would grace the outlaw’s face over the sights, and he chuckled inwardly as he thought of how The Orphan would swear. He did his shooting as an unavoidable duty, a business, a stern necessity; and he took great delight in its accuracy. When he shot at a man he did it with becoming gravity, but nevertheless he radiated pride and cheerfulness when he hit the man’s nose or eye or Adam’s apple at a hundred yards....