The Only True Mother Goose Melodies 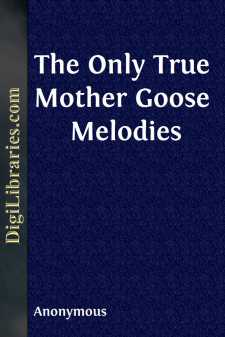 The editor of the new edition of Mother Goose's Melodies knows much more about the curious history of the Boston edition than I do. And the reader will not need, even in these lines of mine, any light on the curious question about Madam Vergoose, or her son-in-law Mr. Fleet, or the Contes de Ma Mere l'Oye, which are so carefully discussed in the preface. All this is admirably discussed also in Mr. William Whitmore's paper published in Albany in 1889, and reprinted in Boston in 1892. In that paper he reproduced in facsimile Isaiah Thomas's edition of Mother Goose published first in 1785.

What I want to tell, is of Mother Goose in the nineteenth Century—the Mother Goose on which the old Boston line was brought up—a line now nearly forgotten. But there were days, Gentle Reader, when an excellent body of people in this little Town of Boston grew up all together loving and loved, brought up their children here, loving and loved, and amused those children from babyhood in their own way. The centre of the baby life of this race was Mother Goose's Melodies in the dear little quarto edition, of which a precise copy is in the reader's hands.

It is this Mother Goose of which the New Englander, if his age be more than three score years and ten, speaks when he speaks of Mother Goose at all. The historical ear marks in it are rather curious. Perhaps the printing of this very edition may raise up some antiquary who can tell us how it came into existence. I wish I knew. I hope some reader of these lines may know. What I know is this, that when the nineteenth century began, in the years from 1800 to 1820, the impression of what we still called the "Mother Country" upon Boston was very strong. The old nurse who took care of me in my babyhood spoke of "weal" and "winegar," where my father and mother spoke of veal and vinegar, just as if she had been a London Cockney. Children played the games of English origin,

"Lady Queen Anne, she sits on her throne,"

though it were fifty years after the Declaration of Independence. I may say in passing, that within the last dozen years I stopped to hear some North End children sing the song Queen Anne, without the slightest idea, I suppose, of who Queen Anne was, or what was their business with her. Alas, and alas, I did not write down the words of that song on the moment!

The truth is that Boston was still a place of foreign commerce. Our ties with London, such as John Adams and other Revolutionaries spoke of so freely, still existed, and a Baby's Song Book like Mother Goose, might still recall, and I suppose repeat, the song of Cockney homes.

So in the nursery, whether one of the North End sailors' home, or of Beacon Street, or Park Street, or Pearl Street, the baby was sung to sleep with London ditties.

All this was sung to New England children, thank God without note or comment, and with no other explanation. But the American traveler who goes into Baring Brothers', Bishopsgate, with his credit, feels a thrill which the clerk who attends to him does not understand, if one speaks to him of St....