The Olden Time Series, Vol. 5: Some Strange and Curious Punishments Gleanings Chiefly from Old Newspapers of Boston and Salem, Massachusetts 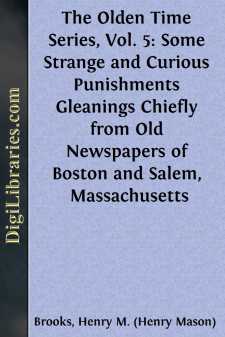 SOME STRANGE AND CURIOUS PUNISHMENTS.

In the month of January, 1761, "Joseph Bennett, John Jenkins, Owen McCarty, and John Wright were publickly whipt at the Cart's Tail thro' the City of New York for petty Larceny,"—so the newspaper account states,—"pursuant to Sentence inflicted on them by the Court of Quarter Sessions held last Week for the Trial of Robbers," etc. In March the same year "One Andrew Cayto received 49 Stripes at the public Whipping Post" in Boston "for House-robbing; viz., 39 for robbing one House, and 10 for robbing another." In 1762 "Jeremiah Dexter, of Walpole, pursuant to Sentence, stood in the Pillory in that Town the space of one Hour for uttering two Counterfeit Mill'd Dollars, knowing them to be such." At Ipswich, Mass., June 16, 1763, "one Francis Brown, for stealing a large quantity of Goods, was found Guilty, and it being the second Conviction, he was sentenced by the Court to sit on the Gallows an Hour with a Rope about his Neck, to be whipt 30 Stripes, and pay treble Damages. He says he was born in Lisbon, and has been a great Thief."

We hear from WorceГ…Вїter that on the eighth inГ…Вїtant one LindГ…Вїay Г…Вїtood in the Pillory there one hour, after which he received 30 Г…Вїtripes at the public whipping poГ…Вїt, and was then branded in the hand; his crime was forgery.

Lindsay was probably branded with the letter F, by means of a hot iron, on the palm of his right hand; this was the custom in such cases.

In Boston, in June, 1762, "the noted Dr. Seth Hudson and Joshua How stood a second Time in the Pillory for the space of one Hour, and the former received 20 and the latter 39 Stripes." In the same town in February, 1764, "one David Powers for Stealing was sentenced to be whip't 20 Stripes, to pay tripel Damages, being £30, and Costs. And one John Gray, Cordwainer, for endeavouring to spread the Infection of the Small Pox, was sentenced to pay a Fine of £6, to suffer three months' Imprisonment, and to pay Costs." In New York in January, 1767, "A Negro Wench was executed for stealing sundry Articles out of the House of Mr. Forbes; and one John Douglass was burnt in the Hand for Stealing a Copper Kettle." In the last half of the eighteenth century it appears to have been a capital crime for negroes to steal. At Springfield, Mass., in October, 1767, "one Elnathan Muggin was found Guilty of passing Counterfeit Dollars, and sentenced to have his Ears cropped," etc. On reading these quaint accounts we are led to inquire whether the punishment for crime in "olden times" was more severe than at the present time. Many people think it was, and justly so, and argue that crime has consequently greatly increased of late years, on account of the lightness of modern sentences or the uncertainty about punishment. This may be true. Crime is said to increase with population always. According to Mr. Buckle, it can be calculated with a considerable degree of accuracy. We can estimate, for instance, the probable number of murders which will take place in a year in a given number of inhabitants....