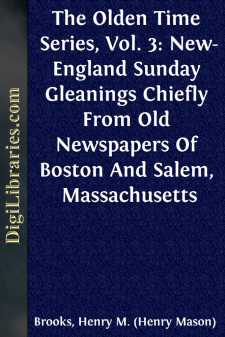 Seeing in an old paper that General Washington was stopped by a "tythingman" in Connecticut in 1789 for the "crime" of riding on Sunday, we were naturally led to think about the "Sabbath question," as it is sometimes called. We find the account referred to in the "Columbian Centinel" for December, 1789.

THE PRESIDENT AND THE TYTHINGMAN.

The PreГ…Вїident, on his return to New-York from his late tour, through Connecticut, having miГ…ВїГ…Вїed his way on Saturday, was obliged to ride a few miles on Sunday morning, in order to gain the town, at which he had previouГ…Вїly propoГ…Вїed to have attended divine Г…Вїervice.—Before he arrived, however, he was met by a Tythingman, who commanding him to Г…Вїtop, demanded the occaГ…Вїion of his riding; and it was not until the PreГ…Вїident had informed him of every circumГ…Вїtance, and promiГ…Вїed to go no further than the town intended, that the Tythingman would permit him to proceed on his journey.

This Sunday question has been so often discussed of late years, and the opinions expressed on the same are so diverse, that it may be well to print a few selections on the subject from some of the old newspapers, that those who are interested may see, as a matter of curiosity, if for no other reason, what views have been entertained within the past century, more especially in New England, in reference to Sunday.

In a Salem paper of 1775 the following notice appeared:—

Whereas the sober and thoughtful People of this Town are much displeased by the great Noise and Disturbance made in the Streets, on Saturday and Sabbath Day Evenings. It is earnestly desired that all Heads of Families would keep their Children and Servants at Home, on those Evenings, and thereby greatly contribute to the Quiet of the Town and Peace of the Inhabitants.

The appearance of Essex Street in Salem at the present time on Saturday evening would seem to indicate that "heads of families" do not now "keep their children and servants at home."

From a communication in the "Massachusetts Centinel," April 30, 1788, "riding on the Sunday" is held to be a "flagrant crime."

As the devoting one day in Г…Вїeven to religious purpoГ…Вїes is a bounden duty we owe to God our creator, and a moГ…Вїt reaГ…Вїonable law of our Commonwealth—to Г…Вїee people riding on the Sunday in purГ…Вїuit of their worldly affairs, is Г…Вїo diГ…ВїguГ…Вїting to the man of true principle, that the neglect of our executive authority of Г…Вїo flagrant a crime, is to be lamented. The common practice of a Mr. C——fl——n of H-pk——n is notorious on this account. Would not wiГ…Вїh to traduce the character of any man, but would only query, whether Г…Вїuch conduct is not highly reprehenГ…Вїible, and deГ…Вїerving the cognizance of the magiГ…Вїtrate.

This is not at all strange from the point of view from which Sunday was then regarded. Indeed many people feel about the same now. They would have the old laws enforced in regard to riding and neglect of public worship. They have fears that the day may degenerate into a European Sunday, with prayers in the morning and amusements in the afternoon and evening....