The Olden Time Series: Vol. 2: The Days of the Spinning-Wheel in New England Gleanings Chiefly from old Newspapers of Boston and Salem, Massachusetts 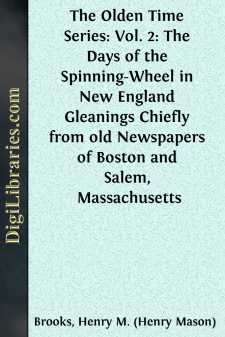 THE DAYS OF THE SPINNING-WHEEL IN NEW ENGLAND.

WITHIN the last few years many young ladies have searched country houses or ransacked old garrets to find spinning-wheels, which, like old chairs, tall clocks, and warming-pans, have now become objects of curiosity and interest to those who take a fancy to antique articles. It has become fashionable to have these things to adorn our Queen Anne houses. And brass andirons and shovels and tongs have come into request, so that we may enjoy the luxury of an open wood fire, which, to our mind, is one of the most cheerful things in this world. Some one has remarked "that to be well-dressed gives a feeling of satisfaction that religion fails to give;" but to us, to sit before a blazing wood fire on a dull, cold evening, gives a feeling of comfort and delight which surpasses anything we know of. What charming companionship in a wood fire! Better than the company of uncongenial persons.

these are enough; we will leave out the "old wine to drink."

"This bright wood fire,    So like to that which warmed and lit    My youthful days, how doth it flit      Back on the periods nigher!    Re-lighting and re-warming with its glow    The bright scenes of my youth,—all gone out now."

Glance backward to some years before the Revolution, and we shall find a spinning-wheel in every house, and then, probably, in constant use. Now its place in our homes is taken by the piano. This instrument had not then come into use. Something resembling it,—namely, the spinnet or the harpsichord,—was to be found in some instances; but it was by no means common to find these, for there was but little knowledge of music in America in those days. A hundred years ago, only one or two churches in Boston had organs, and the public taste, except in rare cases, was decidedly against music of all kinds, especially sacred music. To show how this was, we have heard an old lady say that when she was young, some eighty years or so ago, "musicians, for the most part, were not thought much of" by the most cultivated people of that time; and she assured me that even at a later date, members of military bands, as well as organists and violinists (then called fiddlers) were too often low characters and men much addicted to drinking. The times were too hard for the New England people of those days to cultivate music or indulge in entertainments of any kind except "going to meeting." There was but little money in circulation, and that was almost always in the form of a depreciated currency. Gold and silver were scarce articles, and a large proportion of the necessities of life and luxuries—if luxuries they could be called; they would hardly be so considered by us—were imported from England or elsewhere. The leading occupations were farming, fishing, making New England rum, importing rum, sugar, and molasses from the West Indies, and dry goods from England. The common people were poor enough, in comparison with the condition of the same class at the present time, when they make as good an appearance as the wealthy did a hundred years ago....