The Old Roman World, : the Grandeur and Failure of Its Civilization. 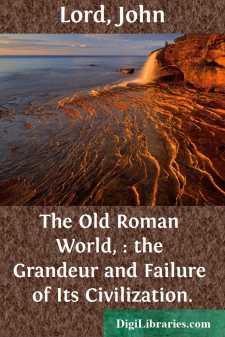 I propose to describe the Greatness and the Misery of the old Roman world; nor is there any thing in history more suggestive and instructive.

A little city, founded by robbers on the banks of the Tiber, rises gradually into importance, although the great cities of the East are scarcely conscious of its existence. Its early struggles simply arrest the attention, and excite the jealousy, of the neighboring nations. The citizens of this little state are warriors, and, either for defense or glory, they subdue one after another the cities of Latium and Etruria, then the whole of Italy, and finally the old monarchies and empires of the world. In two hundred and fifty years the citizens have become nobles, and a great aristocracy is founded, which lasts eight hundred years. Their aggressive policy and unbounded ambition involve the whole world in war, which does not cease until all the nations known to the Greeks acknowledge their sway. Everywhere Roman laws, language, and institutions spread. A vast empire arises, larger than the Assyrian and the Macedonian combined,—a universal empire,—a great wonder and mystery, having all the grandeur of a providential event. It becomes too great to be governed by an oligarchy of nobles. Civil wars create an imperator, who, uniting in himself all the great offices of state, and sustained by the conquering legions, rules from East to West and from North to South, with absolute and undivided sovereignty. The Caesars reach the summit of human greatness and power, and the city of Romulus becomes the haughty mistress of the world. The emperor is worshiped as a deity, and the proud metropolis calls herself eternal. An empire is established by force of arms and by a uniform policy, such as this world has not seen before or since.

Early Roman history is chiefly the detail of successful wars, aggressive and uncompromising, in which we see a fierce and selfish patriotism, an indomitable will, a hard unpitying temper, great practical sagacity, patience, and perseverance, superiority to adverse fortune, faith in national destinies, heroic sentiments, and grand ambition. We see a nation of citizen soldiers, an iron race of conquerors, bent on conquest, on glory, on self-exaltation, attaching but little value to the individual man, but exalting the integrity and unity of the state. We see no fitful policy, no abandonment to the enjoyment of the fruits of victory, no rest, no repose, no love of art or literature, but an unbounded passion for domination. The Romans toiled, and suffered, and died,—never wearied, never discouraged, never satisfied, until their mission was accomplished and the world lay bleeding and prostrate at their feet.

In the latter days of the Republic, the Roman citizen, originally contented with a few acres in the plains and valleys through which the Tiber flowed, becomes a great landed proprietor, owning extensive estates in the conquered territories, an aristocrat, a knight, a senator, a noble, while his dependents disdained to labor and were fed at the public expense. The state could afford to give them corn, oil, and wine, for it was the owner of Egypt, of Greece, of Asia Minor, of Syria, of Spain, of Gaul, of Africa,—a belt of territory around the Mediterranean Sea one thousand miles in breadth, embracing the whole temperate zone, from the Atlantic Ocean to the wilds of Scythia....