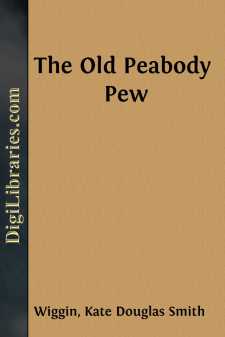 Edgewood, like all the other villages along the banks of the Saco, is full of sunny slopes and leafy hollows.  There are little, rounded, green-clad hillocks that might, like their scriptural sisters, “skip with joy,” and there are grand, rocky hills tufted with gaunt pine trees—these leading the eye to the splendid heights of a neighbour State, where snow-crowned peaks tower in the blue distance, sweeping the horizon in a long line of majesty.

Tory Hill holds its own among the others for peaceful beauty and fair prospect, and on its broad, level summit sits the white-painted Orthodox Meeting-House.  This faces a grassy common where six roads meet, as if the early settlers had determined that no one should lack salvation because of a difficulty in reaching its visible source.

The old church has had a dignified and fruitful past, dating from that day in 1761 when young Paul Coffin received his call to preach at a stipend of fifty pounds sterling a year; answering “that never having heard of any Uneasiness among the people about his Doctrine or manner of life, he declared himself pleased to Settle as Soon as might be Judged Convenient.”

But that was a hundred and fifty years ago, and much has happened since those simple, strenuous old days.  The chastening hand of time has been laid somewhat heavily on the town as well as on the church.  Some of her sons have marched to the wars and died on the field of honour; some, seeking better fortunes, have gone westward; others, wearying of village life, the rocky soil, and rigours of farm-work, have become entangled in the noise and competition, the rush and strife, of cities.  When the sexton rings the bell nowadays, on a Sunday morning, it seems to have lost some of its old-time militant strength, something of its hope and courage; but it still rings, and although the Davids and Solomons, the Matthews, Marks, and Pauls of former congregations have left few descendants to perpetuate their labours, it will go on ringing as long as there is a Tabitha, a Dorcas, a Lois, or a Eunice left in the community.

This sentiment had been maintained for a quarter of a century, but it was now especially strong, as the old Tory Hill Meeting-House had been undergoing for several years more or less extensive repairs.  In point of fact, the still stronger word, “improvements,” might be used with impunity; though whenever the Dorcas Society, being female, and therefore possessed of notions regarding comfort and beauty, suggested any serious changes, the finance committees, which were inevitably male in their composition, generally disapproved of making any impious alterations in a tabernacle, chapel, temple, or any other building used for purposes of worship.  The majority in these august bodies asserted that their ancestors had prayed and sung there for a century and a quarter, and what was good enough for their ancestors was entirely suitable for them.  Besides, the community was becoming less and less prosperous, and church-going was growing more and more lamentably uncommon, so that even from a business standpoint, any sums expended upon decoration by a poor and struggling parish would be worse than wasted....