The Old Manse (From "Mosses from an Old Manse") 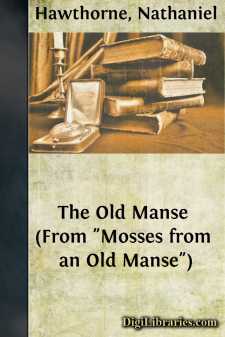 Between two tall gate-posts of rough-hewn stone (the gate itself having fallen from its hinges at some unknown epoch) we beheld the gray front of the old parsonage, terminating the vista of an avenue of black-ash trees. It was now a twelvemonth since the funeral procession of the venerable clergyman, its last inhabitant, had turned from that gateway towards the village burying-ground. The wheel-track leading to the door, as well as the whole breadth of the avenue, was almost overgrown with grass, affording dainty mouthfuls to two or three vagrant cows and an old white horse who had his own living to pick up along the roadside. The glimmering shadows that lay half asleep between the door of the house and the public highway were a kind of spiritual medium, seen through which the edifice had not quite the aspect of belonging to the material world. Certainly it had little in common with those ordinary abodes which stand so imminent upon the road that every passer-by can thrust his head, as it were, into the domestic circle. From these quiet windows the figures of passing travellers looked too remote and dim to disturb the sense of privacy. In its near retirement and accessible seclusion, it was the very spot for the residence of a clergyman,—a man not estranged from human life, yet enveloped, in the midst of it, with a veil woven of intermingled gloom and brightness. It was worthy to have been one of the time-honored parsonages of England, in which, through many generations, a succession of holy occupants pass from youth to age, and bequeath each an inheritance of sanctity to pervade the house and hover over it as with an atmosphere.

Nor, in truth, had the Old Manse ever been profaned by a lay occupant until that memorable summer afternoon when I entered it as my home. A priest had built it; a priest had succeeded to it; other priestly men from time to time had dwelt in it; and children born in its chambers had grown up to assume the priestly character. It was awful to reflect how many sermons must have been written there. The latest inhabitant alone—he by whose translation to paradise the dwelling was left vacant—had penned nearly three thousand discourses, besides the better, if not the greater, number that gushed living from his lips. How often, no doubt, had he paced to and fro along the avenue, attuning his meditations to the sighs and gentle murmurs and deep and solemn peals of the wind among the lofty tops of the trees! In that variety of natural utterances he could find something accordant with every passage of his sermon, were it of tenderness or reverential fear. The boughs over my head seemed shadowy with solemn thoughts, as well as with rustling leaves. I took shame to myself for having been so long a writer of idle stories, and ventured to hope that wisdom would descend upon me with the falling leaves of the avenue, and that I should light upon an intellectual treasure in the Old Manse well worth those hoards of long-hidden gold which people seek for in moss-grown houses. Profound treatises of morality; a layman's unprofessional, and therefore unprejudiced, views of religion; histories (such as Bancroft might have written had he taken up his abode here, as he once purposed) bright with picture, gleaming over a depth of philosophic thought,—these were the works that might fitly have flowed from such a retirement. In the humblest event, I resolved at least to achieve a novel that should evolve some deep lesson, and should possess physical substance enough to stand alone.

In furtherance of my design, and as if to leave me no pretext for not fulfilling it, there was in the rear of the house the most delightful little nook of a study that ever afforded its snug seclusion to a scholar. It was here that Emerson wrote Nature; for he was then an inhabitant of the Manse, and used to watch the Assyrian dawn and Paphian sunset and moonrise from the summit of our eastern hill. When I first saw the room, its walls were blackened with the smoke of unnumbered years, and made still blacker by the grim prints of Puritan ministers that hung around. These worthies looked strangely like bad angels, or at least like men who had wrestled so continually and so sternly with the Devil that somewhat of his sooty fierceness had been imparted to their own visages. They had all vanished now; a cheerful coat of paint and golden-tinted paper-hangings lighted up the small apartment; while the shadow of a willow-tree that swept against the overhanging eaves atempered the cheery western sunshine. In place of the grim prints there was the sweet and lovely head of one of Raphael's Madonnas, and two pleasant little pictures of the Lake of Como....