The Old Castle and Other Stories 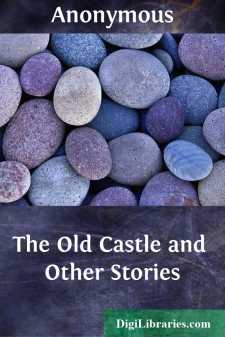 ow pleasant the parlour looked on the evening of "Flaxy's" birthday. To be sure it was November, and the wind was setting the poor dying leaves in a miserable shiver with some dreadful story of an iceberg he had just been visiting. But what cared Dicky and Prue, or Dudley and Flaxy, or all the rest sitting cosily around that charming fire, which glowed as if some kind fairy had filled up the little black grate with carbuncles and rubies? Over the mantle-piece were branches of pretty white sperm candles, whose light fell softly on the heavy red curtains and the roses in the carpet, and danced in the eyes of the happy children.

They, the children, had been having a "splendid time." They had played games, and put together dissected maps, and tried puzzles, and read in Flaxy's wonderful books; and since tea they had had a grand romp at "fox and geese," even such big boys as Bernard and Dudley joining in; and now they were resting with pretty red cheeks and parted mouths.

"Well, what shall we do now?" cried little Prue, who could not bear that a minute of the precious time should be wasted in mere sitting still.

"Why, isn't it a good time for some one else to tell his story?" asked Flaxy.

"Just the thing," was the unanimous response. "Another story! a story!" and then a voice cried, "And let Dudley Wylde tell it."

"Well," said Dudley, slowly, "if I must tell a true story about myself, I'm afraid it won't be much to my credit, but as Flaxy wasn't a coward about it, I'll try to be as brave as a girl. Shall I tell you something that happened to Bernard and me when we lived over in England?"

"Oh, please don't tell that story, Dud," pleaded Bernard with reddening cheeks, but all the rest cried, "Oh, yes, go on, go on," and Dudley began.

"You all know that Bernard and I were both left orphans when we were almost little babies, and Uncle Wylde sent for us to come and live with him—me first, and Bernard about a year afterwards. I was only six years old when Bernard came, but I remember I was very angry about it. Old Joe, the coachman, and I, had had a quarrel that morning, and he told me uncle 'would never care for me any more after Cousin Bernard came, for he was a much finer boy than I, and looked like a young English lord, with his blue eyes and white skin, but I was a little, dark, ill-tempered foreigner (my mother was Italian, you know), and he wondered how uncle could like me at all.'"

"But uncle did love you dearly, you know," broke in Bernard.

"A great deal better than I deserved, that's certain," said Dudley, "but I almost worshipped him, and I couldn't bear the thoughts of his loving any one better than me. So all the day that Bernard was expected I stood sulkily by the window, and would not play, nor eat, nor even speak when Uncle Wylde came and took me in his lap.

"'Poor child,' said uncle, at last, 'he needs some one of his own age to play with. I hope the little cousins will be fine company for each other.'

"Just then the carriage drove up, and uncle ran out and took such a lovely little boy in his arms; but when I heard him say, almost with a sob, 'Darling child, you are just the image of your dear, dear mother,' then I thought, 'There, it is all true what Joe said, uncle loves him the best already;' and I bit my fingers so that when uncle bade me hold out my hand to my cousin, he was frightened to see it covered with blood, and drew back with a shiver; and then I grew angry about that, too, and called him 'proud,' and went and hid away every plaything I could find....