The Old Apple Dealer (From "Mosses from an Old Manse") 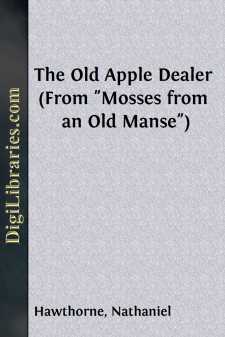 The lover of the moral picturesque may sometimes find what he, seeks in a character which is nevertheless of too negative a description to be seized upon and represented to the imaginative vision by word-painting. As an instance, I remember an old man who carries on a little trade of gingerbread and apples at the depot of one of our railroads. While awaiting the departure of the cars, my observation, flitting to and fro among the livelier characteristics of the scene, has often settled insensibly upon this almost hueless object. Thus, unconsciously to myself and unsuspected by him, I have studied the old apple-dealer until he has become a naturalized citizen of my inner world. How little would he imagine—poor, neglected, friendless, unappreciated, and with little that demands appreciation—that the mental eye of an utter stranger has so often reverted to his figure! Many a noble form, many a beautiful face, has flitted before me and vanished like a shadow. It is a strange witchcraft whereby this faded and featureless old apple-dealer has gained a settlement in my memory.

He is a small man, with gray hair and gray stubble beard, and is invariably clad in a shabby surtout of snuff-color, closely buttoned, and half concealing a pair of gray pantaloons; the whole dress, though clean and entire, being evidently flimsy with much wear. His face, thin, withered, furrowed, and with features which even age has failed to render impressive, has a frost-bitten aspect. It is a moral frost which no physical warmth or comfortableness could counteract. The summer sunshine may fling its white heat upon him or the good fire of the depot room may slake him the focus of its blaze on a winter's day; but all in vain; for still the old roan looks as if he were in a frosty atmosphere, with scarcely warmth enough to keep life in the region about his heart. It is a patient, long-suffering, quiet, hopeless, shivering aspect. He is not desperate,—that, though its etymology implies no more, would be too positive an expression,—but merely devoid of hope. As all his past life, probably, offers no spots of brightness to his memory, so he takes his present poverty and discomfort as entirely a matter of course! he thinks it the definition of existence, so far as himself is concerned, to be poor, cold, and uncomfortable. It may be added, that time has not thrown dignity as a mantle over the old man's figure: there is nothing venerable about him: you pity him without a scruple.

He sits on a bench in the depot room; and before him, on the floor, are deposited two baskets of a capacity to contain his whole stock in trade. Across from one basket to the other extends a board, on which is displayed a plate of cakes and gingerbread, some russet and red-cheeked apples, and a box containing variegated sticks of candy, together with that delectable condiment known by children as Gibraltar rock, neatly done up in white paper. There is likewise a half-peck measure of cracked walnuts and two or three tin half-pints or gills filled with the nut-kernels, ready for purchasers.

Such are the small commodities with which our old friend comes daily before the world, ministering to its petty needs and little freaks of appetite, and seeking thence the solid subsistence—so far as he may subsist of his life.

A slight observer would speak of the old man's quietude; but, on closer scrutiny, you discover that there is a continual unrest within him, which somewhat resembles the fluttering action of the nerves in a corpse from which life has recently departed. Though he never exhibits any violent action, and, indeed, might appear to be sitting quite still, yet you perceive, when his minuter peculiarities begin to be detected, that he is always making some little movement or other. He looks anxiously at his plate of cakes or pyramid of apples and slightly alters their arrangement, with an evident idea that a great deal depends on their being disposed exactly thus and so. Then for a moment he gazes out of the window; then he shivers quietly and folds his arms across his breast, as if to draw himself closer within himself, and thus keep a flicker of warmth in his lonesome heart....