The Ocean Waifs A Story of Adventure on Land and Sea 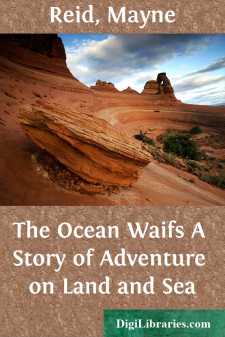 The “vulture of the sea,” borne upon broad wing, and wandering over the wide Atlantic, suddenly suspends his flight to look down upon an object that has attracted his attention.

It is a raft, with a disc not much larger than a dining-table, constructed out of two small spars of a ship,—the dolphin-striker and spritsail yard,—with two broad planks and some narrower ones lashed crosswise, and over all two or three pieces of sail-cloth carelessly spread.

Slight as is the structure, it is occupied by two individuals,—a man and a boy. The latter is lying along the folds of the sail-cloth, apparently asleep. The man stands erect, with his hand to his forehead, shading the sun from his eyes, and scanning the surface of the sea with inquiring glances.

At his feet, lying among the creases of the canvas, are a handspike, a pair of boat oars, and an axe. Nothing more is perceptible of the raft, even to the keen eye of the albatross.

The bird continues its flight towards the west. Ten miles farther on it once more poises itself on soaring wing, and directs its glance downward.

Another raft is seen motionless upon the calm surface of the sea, but differing from the former in almost everything but the name. It is nearly ten times as large; constructed out of the masts, yards, hatches, portions of the bulwarks, and other timbers of a ship; and rendered buoyant by a number of empty water-casks lashed along its edges. A square of canvas spread between two extemporised masts, a couple of casks, an empty biscuit-box, some oars, handspikes, and other maritime implements, lie upon the raft; and around these are more than thirty men, seated, standing, lying,—in short, in almost every attitude.

Some are motionless, as if asleep; but there is that in their prostrate postures, and in the wild expression of their features, that betokens rather the sleep of intoxication. Others, by their gestures and loud, riotous talk, exhibit still surer signs of drunkenness; and the tin cup, reeking with rum, is constantly passing from hand to hand. A few, apparently sober, but haggard and hungry-like, sit or stand erect upon the raft, casting occasional glances over the wide expanse, with but slight show of hope, fast changing to despair.

Well may the sea-vulture linger over this group, and contemplate their movements with expectant eye. The instincts of the bird tell him, that ere long he may look forward to a bountiful banquet!

Ten miles farther to the west, though unseen to those upon the raft, the far-piercing gaze of the albatross detects another unusual object upon the surface of the sea. At this distance it appears only a speck not larger than the bird itself, though in reality it is a small boat,—a ship’s gig,—in which six men are seated. There has been no attempt to hoist a sail; there is none in the gig. There are oars, but no one is using them. They have been dropped in despair; and the boat lies becalmed just as the two rafts. Like them, it appears to be adrift upon the ocean....