The Nursery Rhymes of England 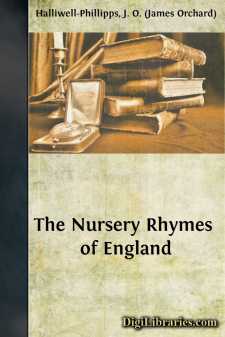 Was a merry old soul,

And a merry old soul was he;

He called for his pipe,

And he called for his bowl,

And he called for his fiddlers three.

Every fiddler, he had a fiddle,

And a very fine fiddle had he;

Oh, there's none so rare,

With King Cole and his fiddlers three!

[The traditional Nursery Rhymes of England commence with a legendary satire on King Cole, who reigned in Britain, as the old chroniclers inform us, in the third century after Christ. According to Robert of Gloucester, he was the father of St. Helena, and if so, Butler must be wrong in ascribing an obscure origin to the celebrated mother of Constantine. King Cole was a brave and popular man in his day, and ascended the throne of Britain on the death of Asclepiod, amidst the acclamations of the people, or, as Robert of Gloucester expresses himself, the "fole was tho of this lond y-paid wel y-nou." At Colchester there is a large earthwork, supposed to have been a Roman amphitheatre, which goes popularly by the name of "King Cole's kitchen." According to Jeffrey of Monmouth, King Cole's daughter was well skilled in music, but we unfortunately have no evidence to show that her father was attached to that science, further than what is contained in the foregoing lines, which are of doubtful antiquity. The following version of the song is of the seventeenth century, the one given above being probably a modernization:—

He call'd for his bowl,

And he call'd for fidlers three:

And there was fiddle fiddle,

For 'twas my lady's birth-day;

And come to be merry.]

He was a goodly king;

He stole three pecks of barley-meal,

A bag-pudding the king did make,

And stuff'd it well with plums:

And in it put great lumps of fat,

As big as my two thumbs.

The king and queen did eat thereof,

And what they could not eat that night,

The queen next morning fried.

[The following song relating to Robin Hood, the celebrated outlaw, is well known at Worksop, in Nottinghamshire, where it constitutes one of the nursery series.]

Is in the mickle wood!

He to the town is gone.

Is telling his beads,

All in the green wood,

Among the green weeds.

If he comes no more,

He will fret full sore!

[The following lines were obtained in Oxfordshire. The story to which it alludes is related by Matthew Paris.]

As I sat high,

The boughs did bend,

My heart did ache

To see what hole the fox did make.

[The following perhaps refers to Joanna of Castile, who visited the court of Henry the Seventh, in the year 1506.]

I had a little nut tree, nothing would it bear

But a silver nutmeg and a golden pear;

The king of Spain's daughter came to visit me,

And all was because of my little nut tree....