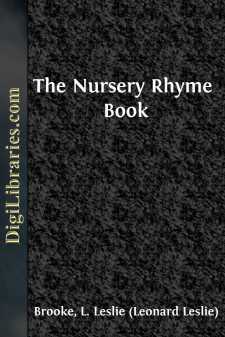 TO read the old Nursery Rhymes brings back queer lost memories of a man's own childhood. One seems to see the loose floppy picture-books of long ago, with their boldly coloured pictures. The books were tattered and worn, and my first library consisted of a wooden box full of these volumes. And I can remember being imprisoned for some crime in the closet where the box was, and how my gaolers found me, happy and impenitent, sitting on the box, with its contents all round me, reading.

There was "Who Killed Cock Robin?" which I knew by heart before I could read, and I learned to read (entirely "without tears") by picking out the letters in the familiar words. I remember the Lark dressed as a clerk, but what a clerk might be I did not ask. Other children, who are little now, will read this book, and remember it well when they have forgotten a great deal of history and geography. We do not know what poets wrote the old Nursery Rhymes, but certainly some of them were written down, or even printed, three hundred years ago. Grandmothers have sung them to their grandchildren, and they again to theirs, for many centuries. In Scotland an old fellow will take a child on his knee for a ride, and sing—

About the people mentioned in this book:—We do not exactly know who Old King Cole was, but King Arthur must have reigned some time about 500 to 600 A.D. As a child grows up, he will, if he is fond of poetry, read thousands of lines about this Prince, and the Table Round where his Knights dined, and how four weeping Queens carried him from his last fight to Avalon, a country where the apple-trees are always in bloom. But the reader will never forget the bag-pudding, which "the Queen next morning fried." Her name was Guinevere, and the historian says that she "was a true lover, and therefore made she a good end." But she had a great deal of unhappiness in her life.

I cannot tell what King of France went up the hill with twenty thousand men, and did nothing when he got there. But I do know who Charley was that "loved good ale and wine," and also "loved good brandy," and was fond of a pretty girl, "as sweet as sugar-candy." This was the banished Prince of Wales, who tried to win back his father's kingdom more than a hundred years ago, and gained battles, and took cities, and would have recovered the throne if his officers had followed him. But he was as unfortunate as he was brave, and when he had no longer a chance, perhaps he did love good ale and wine rather too dearly. As for the pretty girls, they all ran after him, and he could not run away like Georgey Porgey. There is plenty of poetry about Charley, as well as about King Arthur.

About King Charles the First, "upon a black horse," a child will soon hear at least as much as he can want, and perhaps his heart "will be ready to burst," as the rhyme says, with sorrow for the unhappy King. After he had his head cut off, "the Parliament soldiers went to the King," that is, to his son Charles, and crowned him in his turn, but he was thought a little too gay. Then we come to the King "who had a daughter fair, and gave the Prince of Orange her."

There is another rhyme about him:—