The Novel and the Common School 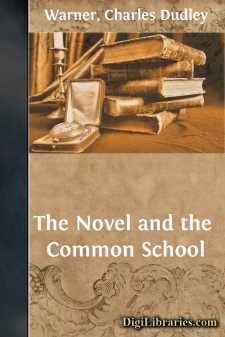 There has been a great improvement in the physical condition of the people of the United States within two generations. This is more noticeable in the West than in the East, but it is marked everywhere; and the foreign traveler who once detected a race deterioration, which he attributed to a dry and stimulating atmosphere and to a feverish anxiety, which was evident in all classes, for a rapid change of condition, finds very little now to sustain his theory. Although the restless energy continues, the mixed race in America has certainly changed physically for the better. Speaking generally, the contours of face and form are more rounded. The change is most marked in regions once noted for leanness, angularity, and sallowness of complexion, but throughout the country the types of physical manhood are more numerous; and if women of rare and exceptional beauty are not more numerous, no doubt the average of comeliness and beauty has been raised. Thus far, the increase of beauty due to better development has not been at the expense of delicacy of complexion and of line, as it has been in some European countries. Physical well-being is almost entirely a matter of nutrition. Something is due in our case to the accumulation of money, to the decrease in an increasing number of our population of the daily anxiety about food and clothes, to more leisure; but abundant and better-prepared food is the direct agency in our physical change. Good food is not only more abundant and more widely distributed than it was two generations ago, but it is to be had in immeasurably greater variety. No other people existing, or that ever did exist, could command such a variety of edible products for daily consumption as the mass of the American people habitually use today. In consequence they have the opportunity of being better nourished than any other people ever were. If they are not better nourished, it is because their food is badly prepared. Whenever we find, either in New England or in the South, a community ill-favored, dyspeptic, lean, and faded in complexion, we may be perfectly sure that its cooking is bad, and that it is too ignorant of the laws of health to procure that variety of food which is so easily obtainable. People who still diet on sodden pie and the products of the frying-pan of the pioneer, and then, in order to promote digestion, attempt to imitate the patient cow by masticating some elastic and fragrant gum, are doing very little to bring in that universal physical health or beauty which is the natural heritage of our opportunity.

Now, what is the relation of our intellectual development to this physical improvement? It will be said that the general intelligence is raised, that the habit of reading is much more widespread, and that the increase of books, periodicals, and newspapers shows a greater mental activity than existed formerly. It will also be said that the opportunity for education was never before so nearly universal. If it is not yet true everywhere that all children must go to school, it is true that all may go to school free of cost. Without doubt, also, great advance has been made in American scholarship, in specialized learning and investigation; that is to say, the proportion of scholars of the first rank in literature and in science is much larger to the population than a generation ago.

But what is the relation of our general intellectual life to popular education? Or, in other words, what effect is popular education having upon the general intellectual habit and taste? There are two ways of testing this. One is by observing whether the mass of minds is better trained and disciplined than formerly, less liable to delusions, better able to detect fallacies, more logical, and less likely to be led away by novelties in speculation, or by theories that are unsupported by historic evidence or that are contradicted by a knowledge of human nature. If we were tempted to pursue this test, we should be forced to note the seeming anomaly of a scientific age peculiarly credulous; the ease with which any charlatan finds followers; the common readiness to fall in with any theory of progress which appeals to the sympathies, and to accept the wildest notions of social reorganization. We should be obliged to note also, among scientific men themselves, a disposition to come to conclusions on inadequate evidence—a disposition usually due to one-sided education which lacks metaphysical training and the philosophic habit. Multitudes of fairly intelligent people are afloat without any base-line of thought to which they can refer new suggestions; just as many politicians are floundering about for want of an apprehension of the Constitution of the United States and of the historic development of society. An honest acceptance of the law of gravitation would banish many popular delusions; a comprehension that something cannot be made out of nothing would dispose of others; and the application of the ordinary principles of evidence, such as men require to establish a title to property, would end most of the remaining. How far is our popular education, which we have now enjoyed for two full generations, responsible for this state of mind? If it has not encouraged it, has it done much to correct it?

The other test of popular education is in the kind of reading sought and enjoyed by the majority of the American people. As the greater part of this reading is admitted to be fiction, we have before us the relation of the novel to the common school. As the common school is our universal method of education, and the novels most in demand are those least worthy to be read, we may consider this subject in two aspects: the encouragement, by neglect or by teaching, of the taste that demands this kind of fiction, and the tendency of the novel to become what this taste demands....