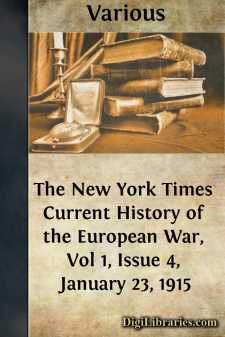 I. First Report from the Front

MY LORD: I have the honor to report the proceedings of the field force under my command up to the time of rendering this dispatch.

1. The transport of the troops from England both by sea and by rail was effected in the best order and without a check. Each unit arrived at its destination in this country well within the scheduled time.

The concentration was practically complete on the evening of Friday, the 21st ultimo, and I was able to make dispositions to move the force during Saturday, the 22d, to positions I considered most favorable from which to commence operations which the French Commander in Chief, Gen. Joffre, requested me to undertake in pursuance of his plans in prosecution of the campaign.

The line taken up extended along the line of the canal from Condé on the west, through Mons and Binche on the east. This line was taken up as follows:

From Condé to Mons inclusive was assigned to the Second Corps, and to the right of the Second Corps from Mons the First Corps was posted. The Fifth Cavalry Brigade was placed at Binche.

In the absence of my Third Army Corps I desired to keep the cavalry division as much as possible as a reserve to act on my outer flank, or move in support of any threatened part of the line. The forward reconnoissance was intrusted to Brig. Gen. Sir Philip Chetwode with the Fifth Cavalry Brigade, but I directed Gen. Allenby to send forward a few squadrons to assist in this work.

During the 22d and 23d these advanced squadrons did some excellent work, some of them penetrating as far as Soignies, and several encounters took place in which our troops showed to great advantage.

2. At 6 A.M., on Aug. 23, I assembled the commanders of the First and Second Corps and cavalry division at a point close to the position and explained the general situation of the Allies, and what I understood to be Gen. Joffre's plan. I discussed with them at some length the immediate situation in front of us.

From information I received from French Headquarters I understood that little more than one, or at most two, of the enemy's army corps, with perhaps one cavalry division, were in front of my position; and I was aware of no attempted outflanking movement by the enemy. I was confirmed in this opinion by the fact that my patrols encountered no undue opposition in their reconnoitring operations. The observations of my aeroplanes seemed also to bear out this estimate.

About 3 P.M. on Sunday, the 23d, reports began coming in to the effect that the enemy was commencing an attack on the Mons line, apparently in some strength, but that the right of the position from Mons and Bray was being particularly threatened.

The commander of the First Corps had pushed his flank back to some high ground south of Bray, and the Fifth Cavalry Brigade evacuated Binche, moving slightly south; the enemy thereupon occupied Binche.

The right of the Third Division, under Gen. Hamilton, was at Mons, which formed a somewhat dangerous salient; and I directed the commander of the Second Corps to be careful not to keep the troops on this salient too long, but, if threatened seriously, to draw back the centre behind Mons....