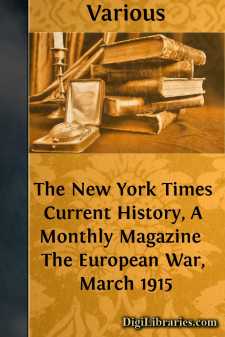 Caldron of the Balkans

But little has hitherto been published in English describing from original sources how the Balkan States, out of which the world conflict arose, resolved, in Kipling's phrase, to "stand up and meet the war." The following documents, taken from authoritative Balkan sources, show for the first time the purely Balkan aspect of the great struggle.

How Turkey Went to War By Ottoman Authorities

Immediately on receiving official notification of the rupture of diplomatic relations between Austria and Servia, the Turkish Grand Vizier hastened to inform the Diplomatic Corps in Constantinople that Turkey would remain neutral in the conflict. Explaining this official Turkish declaration, the following editorial article appeared early in August in the Ministerial paper, Tasfiri-Efkiar, published in Constantinople:

THE declarations made by the Grand Vizier to the Ambassadors of the powers, in order to reassure them as to the dispositions of Turkey, do not constitute from a legal point of view a declaration of neutrality, according to the stipulations of The Hague Conventions; likewise the Austrian ultimatum to Servia, viewed in the same light, is not tantamount to a declaration of war. In fact, The Hague Conventions demand a formal declaration in both cases. But if the formal declaration of Turkish neutrality cannot be made before she has received an official notification of the existing war, it is nevertheless true that the head of the Government, in his conversations with the Ambassadors, has given them to understand what the opinion of the people is here. And even without this, the efforts of the Turkish Government, the desire, and the policy of Turkey, are so explicit that there is no ground for doubt as to the significance of the declarations of the Grand Vizier.

Turkey has never asked for war, as she always has worked toward avoiding it. But we must not misunderstand the meaning of certain terms. Neutrality does not mean indifference. The present Austro-Servian conflict is to a supreme degree interesting to us. In the first place, one of our erstwhile opponents is fighting against a much stronger enemy. In the natural course of things Servia, which till lately was expressing, in a rather open way, her solidarity as a nation, still provoking us, and Greece will be materially weakened. In the second place, the results of this war may surpass the limits of a conflict between two countries, and in that case our interests will be just as materially affected.

We must therefore keep our eyes open, as the circumstances are momentarily changing, and do not permit us to let escape certain advantages which we can secure by an active and rightly acting diplomacy.

The policy of neutrality will impose on us the obligation of avoiding to side with either of the belligerents, but the same policy will force us to take all the necessary measures for safeguarding our interests and our frontiers. If it be true, as reported, that the pacificist tendencies of Turkey constitute one of the safest guarantees of peace in the Balkans, then we must hope that on the day when a general settlement of accounts will be made Europe will be willing to recognize the important part played by Turkey in the preservation of peace in the Near East, and will be eager to rectify, if not all, at least one part of the wrongs she has caused to our country....