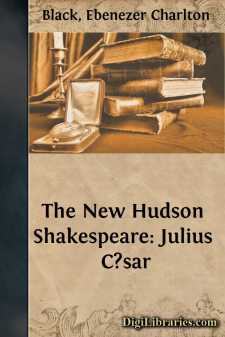 Note. In citations from Shakespeare's plays and nondramatic poems the numbering has reference to the Globe edition, except in the case of this play, where the reference is to this edition.

No event in the history of the world has made a more profound impression upon the popular imagination than the assassination of Julius Cæsar. Apart from its overwhelming interest as a personal catastrophe, it was regarded in the sixteenth century as a happening of the greatest historical moment, fraught with significant public lessons for all time. There is ample evidence that in England from the beginning of Elizabeth's reign it was the subject of much literary and dramatic treatment, and in making the murder of "the mightiest Julius" the climax of a play, Shakespeare was true to that instinct which drew him for material to themes of universal and eternal interest.

I. North's Plutarch. There is no possible doubt that in Julius Cæsar Shakespeare derived the great body of his historical material from The Life of Julius Cæsar, The Life of Marcus Brutus, and The Life of Marcus Antonius in Sir Thomas North's translation of Plutarch. This work was first printed in 1579 in a massive folio dedicated to Queen Elizabeth. A second edition appeared in 1595, and in all probability this was the edition read by Shakespeare. The title-page is reproduced in facsimile on page ix.

This interesting title-page gives in brief the literary history of North's translation, which was made not directly from the original Greek of Plutarch, but from a French version by Jacques Amyot, bishop of Auxerre. In 1603 appeared a third edition with additional Lives and new matter on the title-page. There were subsequent editions in 1612, 1631, 1656, and 1676. The popularity of this work attested by these reprintings was thoroughly deserved, for North's Plutarch is among the richest and freshest monuments of Elizabethan prose literature, and, apart altogether from the use made of it by Shakespeare, is in itself an invaluable repertory of honest, manly, idiomatic English. No abstract of the Plutarchian matter need be given here, as all the more important passages drawn upon for the play are quoted in the footnotes to the text. These will show that in most of the leading incidents the great Greek biographer is closely followed, though in many cases these incidents are worked out and developed with rare fertility of invention and art. It is very significant that in the second half of The Life of Julius Cæsar, which Shakespeare draws upon very heavily, Plutarch emphasizes those weaknesses of Cæsar which are made so prominent in the play. Besides this, in many places the Plutarchian form and order of thought, and also the very words of North's racy and delectable English are retained, with such an embalming for immortality as Shakespeare alone could give.

In Julius Cæsar Shakespeare's indebtedness to North's Plutarch may be summed up as extending to (1) the general story of the play; (2) minor incidents and happenings, as Cæsar's falling-sickness, the omens before his death, and the writings thrown in Brutus's way; (3) touches of detail, as in the description of Cassius's "lean and hungry look" and of Antony's tastes and personal habits; and (4) noteworthy expressions, phrases, and single words, as in , ; ; ; ;