The New Frontiers of Freedom from the Alps to the ?gean 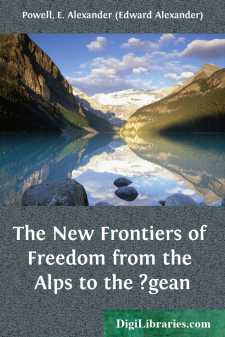 CHAPTER I ACROSS THE REDEEMED LANDS

It is unwise, generally speaking, to write about countries and peoples when they are in a state of political flux, for what is true at the moment of writing may be misleading the next. But the conditions which prevailed in the lands beyond the Adriatic during the year succeeding the signing of the Armistice were so extraordinary, so picturesque, so wholly without parallel in European history, that they form a sort of epilogue, as it were, to the story of the great conflict. To have witnessed the dismemberment of an empire which was hoary with antiquity when the Republic in which we live was yet unborn; to have seen insignificant states expand almost overnight into powerful nations; to have seen and talked with peoples who did not know from day to day the form of government under which they were living, or the name of their ruler, or the color of their flag; to have seen millions of human beings transferred from sovereignty to sovereignty like cattle which have been sold—these are sights the like of which will probably not be seen again in our times or in those of our children, and, because they serve to illustrate a chapter of History which is of immense importance, I have tried to sketch them, in brief, sharp outline, in this book.

Because I was curious to see for myself how the countrymen of Andreas Hofer in South Tyrol would accept their enforced Italianization; whether the Italians of Fiume would obey the dictum of President Wilson that their city must be Slav; how the Turks of Smyrna and the Bulgarians of Thrace would welcome Hellenic rule; whether the Croats and Slovenes and Bosnians and Montenegrins were content to remain pasted in the Jugoslav stamp-album; and because I wished to travel through these disputed regions while the conditions and problems thus created were still new, we set out, my wife and I, at about the time the Peace Conference was drawing to a close, on a journey, made largely by motor-car and destroyer, which took us from the Adige to the Vardar and from the Vardar to the Pruth, along more than five thousand miles of those new national boundaries—drawn in Paris by a lawyer, a doctor and a college professor—which have been termed, with undue optimism perhaps, the frontiers of freedom.

Some of the things which I shall say in these pages will probably give offense to those governments which showed us many courtesies. Those who are privileged to speak for governments are fond of asserting that their governments have nothing to conceal and that they welcome honest criticism, but long experience has taught me that when they are told unpalatable truths governments are usually as sensitive and resentful as friends. Now it has always seemed to me that a writer owes his first allegiance to his readers. To misinform them by writing only half-truths for the sake of retaining the good-will of those written about is as unethical, to my way of thinking, as it is for a newspaper to suppress facts which the public is entitled to know in order not to offend its advertisers....