The New Book of Martyrs 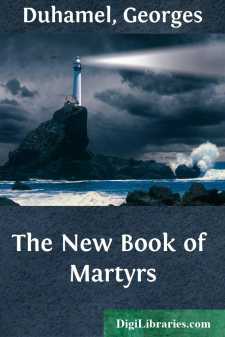 From the disfigured regions where the cannon reigns supreme, to the mountains of the South, to the ocean, to the glittering shores of the inland sea, the cry of wounded men echoes throughout the land, and a vast kindred cry seems to rise responsive from the whole world.

There is no French town in which the wounds inflicted on the battle-field are not bleeding. Not one which has not accepted the duty of assuaging something of the sum of suffering, just as it bears its part in the sum of mourning; not one which may not hear within its own walls an echo of the greater lamentation swelling and muttering where the conflict seems to rage unceasingly. The waves of war break upon the whole surface of the country, and like the incoming tide, strew it with wreckage.

In the beds which the piety of the public has prepared on every side, stricken men await the verdict of fate. The beds are white, the bandages are spotless; many faces smile until the hour when they are flushed with fever, and until that same fever makes a whole nation of wounded tremble on the Continent.

Some one who had been visiting the wounded said to me: "The beds are really very white, the dressings are clean, all the patients seem to be playing cards, reading the papers, eating dainties; they are simple, often very gentle, they don't look very unhappy. They all tell the same story... The war has not changed them much. One can recognise them all."

Under their bandages are wounds you cannot imagine. Below the wounds, in the depths of the mutilated flesh, a soul, strange and furtive, is stirring in feverish exaltation, a soul which does not readily reveal itself, which expresses itself artlessly, but which I would fain make you understand.

In these days, when nothing retains its former semblance, all these men are no longer those you so lately knew. Suffering has roused them from the sleep of gentle life, and every day fills them with a terrible intoxication. They are now something more than themselves; those we loved were merely happy shadows.

Let us lose none of their humble words, let us note their slightest gestures, and tell me, tell me that we will think of them together, now and later, when we realise the misery of the times and the magnitude of their sacrifice.

THE STORY OF CARRE AND LERONDEAU

They came in like two parcels dispatched by the same post, two clumsy, squalid parcels, badly packed, and damaged in transit. Two human forms rolled up in linens and woollens, strapped into strange instruments, one of which enclosed the whole man, like a coffin of zinc and wire.

They seemed to be of no particular age; or rather, each might have been a thousand and more, the age of swaddled mummies in the depths of sarcophagi.

We washed, combed, and peeled them, and laid them very cautiously between clean sheets; then we found that one had the look of an old man, and that the other was still a boy....