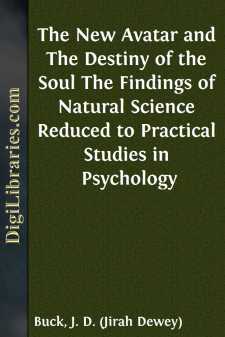 The reader who is willing to give the following pages a careful reading, and a courteous hearing, is entitled to know the basis of study, observation or experience from which the suggestions, inferences and conclusions proceed, in order that he may fairly estimate their value.

At the age of seventy-two, my egotism is at least softened by the discovery of the many things I do not know; and my dogmatism, so far as it ever existed, is equally relaxed by the realization that it is a bar to light and knowledge, which rest so largely on demonstration.

For more than forty-five years I have been engaged in the active practice of medicine with consultations extending over three States.

For an equal length of time I have lectured in Medical Colleges, fifteen years on the subject of Physiology, an equal number on Therapeutics (including Pathology and Histology), and for the last fifteen years on Psychology, Mental and Nervous Diseases, and all this time with a large College Clinic from the poorer classes.

From first to last, my “Study of Medicine” has been generically and specifically a “Study of Man,” physical, mental, ethical, and psychical.

Outside of Medicine as a “Calling” or a “Profession” my real interest has been to unravel the nature of man, grasp the problem of human life, and to apprehend the nature, laws, and destiny of the human soul. My library covers a rather continuous thread from 1543, and the time of Paracelsus, to Profs. James, Ladd, Lombroso, Sir Oliver Lodge, and Münsterberg.

My reading dips into the Sacred Books of the East, the records of the Past, and particularly the psychic phenomena of different ages, finding at last the Constructive Theorem clearer than anywhere else in the “School of Natural Science,” from the fact that it is demonstrably cognizant of all preceding work, and definitely conforms to the strict demands of Science—Physical, Mental, Ethical, Psychical and Spiritual, and proves to be the very thing for which I have searched for nearly half a century.

The foregoing statements are not made to force credulity nor to assume authority. They simply mean—This is how, and where, and how long, I have been searching, largely, also at the bedside of the sick, the deranged and the dying; from the first breath of the little one that comes—

“Out from the shore of the Great Unknown

Weeping and wailing and all alone,”

to the death-damp and the last sigh of the aged; in one case at nearly one hundred and four years.

Once I found an old lady of eighty, dying. The “death-damp” on her brow; the “death-rattle” in her throat; the chin dropped, and no pulse at the wrist. She had a wayward son who had been promised due notice of any change, and he had been sent for. Speaking distinctly in her ear I called her back; the motive being the grief of her son at not bidding each other good-bye. The response was immediate. The “rattle” in her throat ceased. The pulse promptly returned. The mouth closed. Then I said—“open your eyes,” which she promptly did with a gentle smile....