The New Adam and Eve (From "Mosses from an Old Manse") 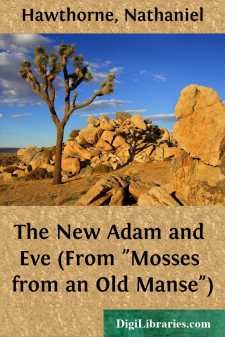 We who are born into the world's artificial system can never adequately know how little in our present state and circumstances is natural, and how much is merely the interpolation of the perverted mind and heart of man. Art has become a second and stronger nature; she is a step-mother, whose crafty tenderness has taught us to despise the bountiful and wholesome ministrations of our true parent. It is only through the medium of the imagination that we can lessen those iron fetters, which we call truth and reality, and make ourselves even partially sensible what prisoners we are. For instance, let us conceive good Father Miller's interpretation of the prophecies to have proved true. The Day of Doom has burst upon the globe and swept away the whole race of men. From cities and fields, sea-shore and midland mountain region, vast continents, and even the remotest islands of the ocean, each living thing is gone. No breath of a created being disturbs this earthly atmosphere. But the abodes of man, and all that he has accomplished, the footprints of his wanderings and the results of his toil, the visible symbols of his intellectual cultivation and moral progress,—in short, everything physical that can give evidence of his present position,—shall remain untouched by the hand of destiny. Then, to inherit and repeople this waste and deserted earth, we will suppose a new Adam and a new Eve to have been created, in the full development of mind and heart, but with no knowledge of their predecessors nor of the diseased circumstances that had become incrusted around them. Such a pair would at once distinguish between art and nature. Their instincts and intuitions would immediately recognize the wisdom and simplicity of the latter; while the former, with its elaborate perversities, would offer them a continual succession of puzzles.

Let us attempt, in a mood half sportive and half thoughtful, to track these imaginary heirs of our mortality, through their first day's experience. No longer ago than yesterday the flame of human life was extinguished; there has been a breathless night; and now another morn approaches, expecting to find the earth no less desolate than at eventide.

It is dawn. The east puts on its immemorial blush, although no human eye is gazing at it; for all the phenomena of the natural world renew themselves, in spite of the solitude that now broods around the globe. There is still beauty of earth, sea, and sky, for beauty's sake. But soon there are to be spectators. Just when the earliest sunshine gilds earth's mountain-tops, two beings have come into life, not in such an Eden as bloomed to welcome our first parents, but in the heart of a modern city. They find themselves in existence, and gazing into one another's eyes. Their emotion is not astonishment; nor do they perplex themselves with efforts to discover what, and whence, and why they are. Each is satisfied to be, because the other exists likewise; and their first consciousness is of calm and mutual enjoyment, which seems not to have been the birth of that very moment, but prolonged from a past eternity. Thus content with an inner sphere which they inhabit together, it is not immediately that the outward world can obtrude itself upon their notice.

Soon, however, they feel the invincible necessity of this earthly life, and begin to make acquaintance with the objects and circumstances that surround them. Perhaps no other stride so vast remains to be taken as when they first turn from the reality of their mutual glance to the dreams and shadows that perplex them everywhere else.

"Sweetest Eve, where are we?" exclaims the new Adam; for speech, or some equivalent mode of expression, is born with them, and comes just as natural as breath. "Methinks I do not recognize this place."

"Nor I, dear Man," replies the new Eve. "And what a strange place, too! Let me come closer to thy side and behold thee only; for all other sights trouble and perplex my spirit."

"Nay, Eve," replies Adam, who appears to have the stronger tendency towards the material world; "it were well that we gain some insight into these matters. We are in an odd situation here. Let us look about us."

Assuredly there are sights enough to throw the new inheritors of earth into a state of hopeless perplexity. The long lines of edifices, their windows glittering in the yellow sunrise, and the narrow street between, with its barren pavement tracked and battered by wheels that have now rattled into an irrevocable past! The signs, with their unintelligible hieroglyphics! The squareness and ugliness, and regular or irregular deformity of everything that meets the eye! The marks of wear and tear, and unrenewed decay, which distinguish the works of man from the growth of nature! What is there in all this, capable of the slightest significance to minds that know nothing of the artificial system which is implied in every lamp-post and each brick of the houses?...