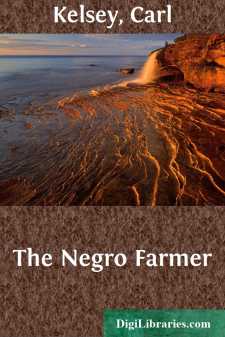 In the last three hundred years there have been many questions of general interest before the American people. It is doubtful, however, if there is another problem, which is as warmly debated to-day as ever and whose solution is yet so uncertain, as that of the Negro. In the second decade of the seventeenth century protests were being filed against black slavery, but the system was continued for nearly 250 years. The discussion grew more and more bitter, and to participation in it ignorance, then as now, was no bar. The North had less and less direct contact with the Negro. The religious hostility to human bondage was strengthened by the steadily increasing difference in economic development which resulted in the creation of sectional prejudices and jealousies. The North held the negro to be greatly wronged, and accounts of his pitiable condition and of the many individual cases of ill treatment fanned the flames of wrath. The reports of travelers, however, had little influence compared with the religious sentiments which felt outraged by the existence of bond servitude in the land. Through all the years there was little attempt to scientifically study the character of the problem or the nature of the subject. A mistaken economic sentiment in the South and a strong moral sentiment at the North rendered such studies unnecessary, if not impossible. The South, perceiving the benefits of slavery, was blind to its fundamental weaknesses, and the North, unacquainted with Negro character, held to the natural equality of all men. Thus slavery itself became a barrier to the getting of an adequate knowledge of the needs of the slave. The feeling grew that if the shackles of slavery were broken, the Negro would at once be as other men. The economic differences finally led to the war. It is not to be forgotten that slavery itself was not the cause of the war, nor was there any thought on the part of the Union leaders to make the blacks citizens. That this was done later was a glowing tribute to their ignorance of the real demands of the situation. The Republican party of to-day shows no indication of repeating this mistake in the newly acquired islands. I would not be understood as opposing suffrage of the blacks, but any thoughtful observer must agree that as a race they were not prepared for popular government at the time of their liberation. The folly of the measures adopted none can fail to see who will read the history of South Carolina or Mississippi during what is called "Reconstruction."

Immediately after the war, new sources of information regarding the Negro were afforded the North. The leaders of the carpet-bag regime, playing political games, circulated glowing reports of the progress of the ex-slaves. A second class of persons, the teachers, went South, and back came rose-colored accounts. It might seem that the teacher could best judge of the capacity of a people. The trouble is that in the schools they saw the best specimens of the race, at the impressionable period of their lives, and under abnormal conditions. There is in the school an atmosphere about the child which stimulates his desire to advance, but a relapse often comes when ordinary home conditions are renewed. Moreover, it is well known that the children of all primitive races are very quick and apt up to a certain period in their lives, excelling often children of civilized peoples, but that this disappears when maturity is reached. Hence, the average teacher, not coming in close contact with the mass of the people under normal surroundings, gives, although sincerely, a very misleading picture of actual conditions. A third class of informants were the tourists, and their ability to get at the heart of the situation is obvious. There remain to be mentioned the Negro teachers and school entrepreneurs. Naturally these have presented such facts as they thought would serve to open the purses of their hearers. Some have been honest, many more unintentionally dishonest, and others deliberately deceitful. The relative size of these classes it is unnecessary to attempt to ascertain. They have talked and sung their way into the hearts of the hearers as does the pitiful beggar on the street. The donor sees that evidently something is needed, and gives with little, if any, careful investigation as to the real needs of the case. The result of it all has been that the testimony of those who knew far more than was possible for any outsider, the southern whites, has gone unheeded, not to say that it has been spurned as hostile and valueless. The blame, of course, is not always on one side, and as will be shown later, there are many southern whites who have as little to do with the Negro, and consequently know as little about him, as the average New Yorker. This situation has been most unfortunate for all concerned. It should not be forgotten that the question of the progress of the Negro has far more direct meaning for the southerner, and that he is far more deeply interested in it than is his northern brother, the popular impression to the contrary notwithstanding. It is unnecessary to seek explanations, but it is a pleasure to recognize that there are many indications that a better day is coming, and indications now point to a hearty co-operation in educational efforts. There are many reasons for the change, and perhaps the greatest of these is summed up in "Industrial Training."

The North is slowly learning that the Negro is not a dark-skinned Yankee, and that thousands of generations in Africa have produced a being very different from him whose ancestors lived an equal time in Europe....