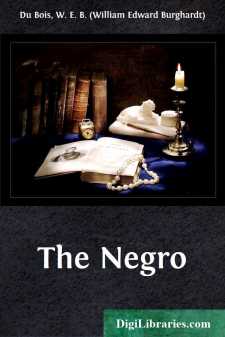 "Behold!The Sphinx is Africa. The bondOf Silence is upon her. OldAnd white with tombs, and rent and shorn;With raiment wet with tears and torn,And trampled on, yet all untamed." MILLER

Africa is at once the most romantic and the most tragic of continents. Its very names reveal its mystery and wide-reaching influence. It is the "Ethiopia" of the Greek, the "Kush" and "Punt" of the Egyptian, and the Arabian "Land of the Blacks." To modern Europe it is the "Dark Continent" and "Land of Contrasts"; in literature it is the seat of the Sphinx and the lotus eaters, the home of the dwarfs, gnomes, and pixies, and the refuge of the gods; in commerce it is the slave mart and the source of ivory, ebony, rubber, gold, and diamonds. What other continent can rival in interest this Ancient of Days?

There are those, nevertheless, who would write universal history and leave out Africa. But how, asks Ratzel, can one leave out the land of Egypt and Carthage? and Frobenius declares that in future Africa must more and more be regarded as an integral part of the great movement of world history. Yet it is true that the history of Africa is unusual, and its strangeness is due in no small degree to the physical peculiarities of the continent. With three times the area of Europe it has a coast line a fifth shorter. Like Europe it is a peninsula of Asia, curving southwestward around the Indian Sea. It has few gulfs, bays, capes, or islands. Even the rivers, though large and long, are not means of communication with the outer world, because from the central high plateau they plunge in rapids and cataracts to the narrow coastlands and the sea.

The general physical contour of Africa has been likened to an inverted plate with one or more rows of mountains at the edge and a low coastal belt. In the south the central plateau is three thousand or more feet above the sea, while in the north it is a little over one thousand feet. Thus two main divisions of the continent are easily distinguished: the broad northern rectangle, reaching down as far as the Gulf of Guinea and Cape Guardafui, with seven million square miles; and the peninsula which tapers toward the south, with five million square miles.

Four great rivers and many lesser streams water the continent. The greatest is the Congo in the center, with its vast curving and endless estuaries; then the Nile, draining the cluster of the Great Lakes and flowing northward "like some grave, mighty thought, threading a dream"; the Niger in the northwest, watering the Sudan below the Sahara; and, finally, the Zambesi, with its greater Niagara in the southeast. Even these waters leave room for deserts both south and north, but the greater ones are the three million square miles of sand wastes in the north.

More than any other land, Africa lies in the tropics, with a warm, dry climate, save in the central Congo region, where rain at all seasons brings tropical luxuriance. The flora is rich but not wide in variety, including the gum acacia, ebony, several dye woods, the kola nut, and probably tobacco and millet....