The Naval Pioneers of Australia 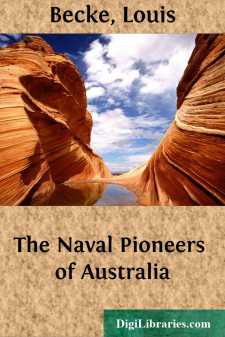 Learned geographers have gone back to very remote times, even to the Middle Ages, and, by the aid of old maps, have set up ingenious theories showing that the Australian continent was then known to explorers. Some evidence has been adduced of a French voyage in which the continent was discovered in the youth of the sixteenth century, and, of course, it has been asserted that the Chinese were acquainted with the land long before Europeans ventured to go so far afloat. There is strong evidence that the west coast of Australia was touched by the Spaniards and the Portuguese during the first half of the sixteenth century, and proof of its discovery early in the seventeenth century. At the time of these very early South Sea voyages the search, it should always be remembered, was for a great Antarctic continent. The discovery of islands in the Pacific was, to the explorers, a matter of minor importance; New Guinea, although visited by the Portuguese in 1526, up to the time of Captain Cook was supposed by Englishmen to be a part of the mainland, and the eastern coast of Australia, though touched upon earlier and roughly outlined upon maps, remained unknown to them until Cook explored it.

Early Voyages to Australia, by R.H. Major, printed by the Hakluyt Society in 1859, is still the best collection of facts and contains the soundest deductions from them on the subject, and although ably-written books have since been published, the industrious authors have added little or nothing in the way of indisputable evidence to that collected by Major. The belief in the existence of the Australian continent grew gradually and naturally out of the belief in a great southern land. Mr. G.B. Barton, in an introduction to his valuable Australian 1578 history, traces this from 1578, when Frobisher wrote:—

"Terra Australis seemeth to be a great, firme land, lying under and aboute the south pole, being in many places a fruitefull soyle, and is not yet thorowly discovered, but only seen and touched on the north edge thereof by the travaile of the Portingales and Spaniards in their voyages to their East and West Indies. It is included almost by a paralell, passing at 40 degrees in south latitude, yet in some places it reacheth into the sea with great promontories, even into the tropicke Capricornus. Onely these partes are best known, as over against Capo d' buona Speranza (where the Portingales see popingayes commonly of a wonderful greatnesse), and againe it is knowen at the south side of the straight of Magellanies, and is called Terra del Fuego. It is thoughte this south lande, about the pole Antartike, is farre bigger than the north land about the pole Artike; but whether it be so or not, we have no certaine knowledge, for we have no particular description thereof, as we have of the land under and aboute the north pole."

"This land about the Straits is not perfectly discovered, whether it be Continent or Islands....