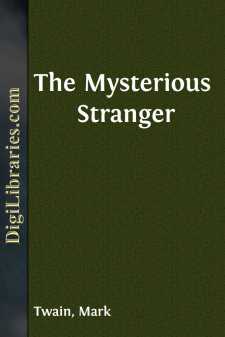 It was in 1590—winter. Austria was far away from the world, and asleep; it was still the Middle Ages in Austria, and promised to remain so forever. Some even set it away back centuries upon centuries and said that by the mental and spiritual clock it was still the Age of Belief in Austria. But they meant it as a compliment, not a slur, and it was so taken, and we were all proud of it. I remember it well, although I was only a boy; and I remember, too, the pleasure it gave me.

Yes, Austria was far from the world, and asleep, and our village was in the middle of that sleep, being in the middle of Austria. It drowsed in peace in the deep privacy of a hilly and woodsy solitude where news from the world hardly ever came to disturb its dreams, and was infinitely content. At its front flowed the tranquil river, its surface painted with cloud-forms and the reflections of drifting arks and stone-boats; behind it rose the woody steeps to the base of the lofty precipice; from the top of the precipice frowned a vast castle, its long stretch of towers and bastions mailed in vines; beyond the river, a league to the left, was a tumbled expanse of forest-clothed hills cloven by winding gorges where the sun never penetrated; and to the right a precipice overlooked the river, and between it and the hills just spoken of lay a far-reaching plain dotted with little homesteads nested among orchards and shade trees.

Eseldorf was a paradise for us boys. We were not overmuch pestered with schooling. Mainly we were trained to be good Christians; to revere the Virgin, the Church, and the saints above everything. Beyond these matters we were not required to know much; and, in fact, not allowed to. Knowledge was not good for the common people, and could make them discontented with the lot which God had appointed for them, and God would not endure discontentment with His plans. We had two priests. One of them, Father Adolf, was a very zealous and strenuous priest, much considered.

There may have been better priests, in some ways, than Father Adolf, but there was never one in our commune who was held in more solemn and awful respect. This was because he had absolutely no fear of the Devil. He was the only Christian I have ever known of whom that could be truly said. People stood in deep dread of him on that account; for they thought that there must be something supernatural about him, else he could not be so bold and so confident. All men speak in bitter disapproval of the Devil, but they do it reverently, not flippantly; but Father Adolf's way was very different; he called him by every name he could lay his tongue to, and it made everyone shudder that heard him; and often he would even speak of him scornfully and scoffingly; then the people crossed themselves and went quickly out of his presence, fearing that something fearful might happen....