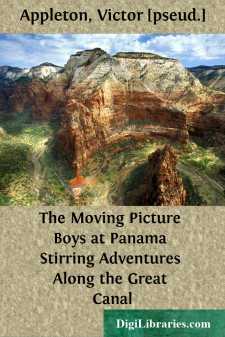 CHAPTER I TO THE RESCUE

With a series of puffs and chugs a big, shiny motor cycle turned from the road into the graveled drive at the side of a white farmhouse. Two boys sat on the creaking saddles. The one at the front handle bars threw forward the clutch lever, and then turned on the power sharply to drive the last of the gases out of the twin cylinders.

The motor cycle came to a stop near a shed, and the two lads, swinging off, looked at each other for a moment.

"Some ride, that!" observed one. "You had her going then, Blake!"

"Just a little, Joe—yes. It was a nice level stretch, and I wanted to see what she could do."

"You didn't let her out to the full at that; did you?"

"I should say not!" answered the one who had ridden in front, and guided the steed of steel and gasoline. "She'll do better than ninety miles an hour on the level; but I don't want to ride on her when she's doing it."

"It sure was. I think somebody must be robbing the post-office, for we ought to have had a letter from Mr. Hadley before this," and he laughed at his own joke.

He stopped suddenly, and a blush suffused the tan of his cheeks.

"Might as well say it as think it," broke in Blake with another laugh that showed his white, even teeth. "Hasn't Mabel written to you this week?"

"What if she hasn't?" fired back Joe.

"Only I suppose you are put out because you haven't had a postcard from Birdie Lee!" challenged Joe.

"Oh, well, have it your own way," and Blake, with a shrug of his broad shoulders, began to wheel the motor cycle into the shed.

"No, but it is queer; isn't it?" went on Joe. "Here we've been back from the flood district over two weeks now, and we haven't had a line from Mr. Hadley. He promised to write, too, and let us know what sort of moving pictures he might be in line for next. Our vacation will soon be over, and we don't want to be idle."

"That's right," agreed his chum. "There's no money in sitting around, when the film isn't running. Oh, well, I suppose Mr. Hadley has been so busy that he hasn't had time to make his plans.

"Besides," Blake went on, "you know there was a lot of trouble over the Mississippi flood pictures—reels of film getting lost, and all that—to say nothing of the dangers our friends ran. Birdie Lee said she'd never forget what they suffered."

"I don't blame her. Well, maybe they haven't got straightened out enough yet to feel like writing. But it sure is nice here, and I don't mind if we stay another week or so," and he looked up the pleasant valley, on one side of which was perched the farmhouse where the two moving picture boys had been spending their vacation.

"It sure is nice," agreed Blake. "And it's lots more fun since we got this motor cycle," for they had lately invested in the powerful vehicle on which they had made many trips about the surrounding country....