The Morris Book, Part 1 A History of Morris Dancing, With a Description of Eleven Dances as Performed by the Morris-Men of England 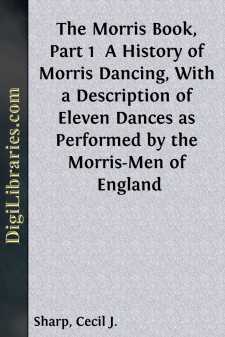 We have been drawn to the publication of tunes and description of the old English Morris, not primarily for the information of the archæologist and scholar, but to help those who may be disposed to restore a vigorous and native custom to its lapsed pre-eminence.

Whether we have erred in believing that there exists to-day a wide and keen desire for that restoration will be plainly shown in the reception and the result of our endeavour. How we ourselves came by the belief in that desire is easily told.

The idea that the Morris dance might once again be known amongst us, in town and countryside, as the ordered expression of a national spirit, was given to us in this wise. One of us—it is not by now too much to claim—had acquired an enthusiasm for Folk-music, and a certain knack of finding it where it still survived in the agèd memories of the peasantry, and of transcribing and preserving it when found. The other had also his knack of passing on the music that pleased him to susceptible and willing juniors, and of making them to perform the same. In a happy hour the collector with his treasury and the teacher, pining for some fresher and sincerer melodies, met together. The "Folk Songs from Somerset" were given to those working girls of London town to whom this book is dedicated. From the very start we were aware that the old songs, merry or mournful, that until then had been looked upon by this newer generation for the greater part with something of an antiquarian and merely curious eye, had been given wings and a new vitality. The songs of peasant-folk long dead, songs of love and war, parting and death, prospered and spread in the London streets and workrooms like the news of victory. We were very well used to find in these singers apt and willing learners; we were also used to note that whatsoever we had found to teach them hitherto, passed, when the performance was done, into forgetfulness: we were totally unused to find this fertility and resonance follow, as it followed upon the teaching of the Folk-songs. It was like a sowing and a full harvest in a place where, until now, we had tilled all but unavailingly.

Forbye Folk-songs, the collector had noted, some seven years before, a set of Morris tunes from Kimber, leader of the Headington (Oxon) men; these had lain until now unused. Seeing the Folk-music fall upon such good ground and flourish so amazingly, even amongst these quick-witted Londoners, strangers to the countryside, it naturally suggested itself to him that here was the opportunity, so long desired, to wake the Morris from its long sleep. Anybody not deaf and blind, or unobservant as a stone, knows that the genius of dancing is born in the London girl of the people, as surely as in children of the sun.

We had Kimber and his cousin up to town; and the result of their coming far outran our fondest anticipations. The Morris, like that magic beanstalk, seemed to outwit the laws of nature: we saw it in the heart of London rise up from its long sleep before our very eyes. In connection with this affair, the mention of that well-beloved fable is appropriate and irresistible. The first dance that was set before these Londoners—upon this occasion which we enthusiasts make bold to call historic—was Bean-setting. It represents the setting of the seed in springtime. Of course the music, its lilt and the steps that their forefathers had footed to it in the olden time, were as little known to these, the London born, as the tongue and ceremonial of old Peru. As little known, yet not strange at all; it was a summons never heard until now, yet instantly obeyed; because, though unfamiliar and unforeseen, it was of England and came, even though it was centuries upon the way, to kinsfolk. Let the precisian explain it as he may, that is our way of accounting for an experience both fruitful and astounding. Within half an hour of the coming of these Morris-men we saw the Bean-setting—its thumping and clashing of staves, its intricate figures and steps hitherto unknown—full swing upon a London floor. And upon the delighted but somewhat dazed confession of the instructor, we saw it perfect in execution to the least particular. Perfect, yet in a different order of perfection from that attainable by men. It may be noted here and now by all who have to do with the instruction of girls in the Morris, that the feminine temperament inevitably robs the dance of something of its sturdiness. It is nothing to lament; for what is lost in vigour is assuredly more than made good in gracefulness....